I call all of the downtown neighborhoods historic. From my point of view, they are already. But that doesn’t mean they actually have true designation from the City.

One exception is within The John S. Park Neighborhood. The area between has official designation for the area between Charleston and Franklin, and 5th place and 9th Street.

John S. Park went thru the process several years ago. From it was developed a set of “guidelines” to help the neighbors maintain and protect the rich heritage of the area as well as the architectural integrity. They also created a walking tour brochure. Here is the John S. Park Historic District Walking Tour in PDF format. Take the tour sometime. It’s a very eye opening.

You’ll notice if you look at the tour that most of the homes in JSP Historic District were built before 1950. It’s just 1 more block south, below Franklin Avenue where you’ll break into a completely different type of architecture from post 1950. Welcome to Mid Century Modern. The modernism really starts with Franklin on the north. 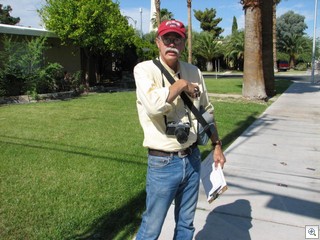 Yesterday I met up with crew who’s conducting the inventory and survey. Monday and Tuesday are being spent taking a picture of every property in Phase One of the survey. They’ll be writing descriptions, noting the details, INCLUDING obvious changes that have been made to the homes. The number of homes that have been significantly altered with 2nd stories, rough stucco, popouts around windows, arches, mexican fences, and other components that are not Mid Century Modern will play a key role in determining whether the district will be eligible for Historic District designation.

The goal is to show that there’s a unified, cohesive district characterized by the architecture and the history. Courtney Mooney, the Historic Preservation Officer for the City of Las Vegas is supervising the process.

Eventually, I’d love to see all of the neighborhood associations go thru the process. Beverly Green is starting it up now, and I hope John S. Park will continue with the rest of their neighborhood that’s south of Franklin Ave.

There is no legislation in the county allowing for Historic Districts. Nor is there an historic preservation office in the county. Chris G. is working on it, and we encourage her to get it passed. It’s especially important for Paradise Palms, Paradise Crest and Royal Crest Rancheros, which are all in the county and not in the city.