(All 3 articles relating to grafitti are courtesy of the Southern Nevada Graffiti Coalition and are published in  County Commissioner District E’s Chris Giunchigliani’s July 1, 2009 online newletter.

When Art Becomes A Crime

Many people argue that graffiti is art, but when there is no permission given, that is when it becomes a crime.

A “crime” is generally defined as an act committed by a person who injures another person or another person’s property. There must be intent on the part of the offender, and there must be a victim who wishes for the offender to be criminally prosecuted. When investigating a graffiti offense the police must establish that there was no legitimate authorization for the graffiti to be placed before an arrest can be made.

Graffiti is one of the most costly property crimes any community has to confront and manage. There is nothing artistic about damaging the property of others and victimizing citizens.

Graffiti placed without permission is not art, it is crime.

What to Do If Your Property Is Tagged with Graffiti

With graffiti vandalism continuing to be the most costly property crime our community faces our local public agencies are expanding efforts to curb graffiti and bring vandals to justice. One of these measures includes the use of high-tech camera systems which monitor high-graffiti areas. The cameras snap a photo of the graffiti vandal in the act. Some cameras also give a loud audible warning to the offender that they have just been photographed. The photos may then be forwarded to law enforcement for investigation or provided to the media.

Many graffiti vandals commit their crime in a manner that is clandestine. They often operate under the cover of darkness or in a manner that reduces their visibility. These camera systems are an effective means of documenting the crime as it is happening and then serve as a deterrent.

You can also take steps to report graffiti in your area and have it removed:

To make a police report: Stop by your closest police station and make a report. This report will be assigned to a detective and the matter will be investigated. The owner of the property which was damaged must be the person making the report.

To report graffiti in progress: If you see a graffiti vandal in the act of placing graffiti, notify the police. It is a crime in progress and you may call 911. A police call-taker will dispatch officers to the location. Do not intervene or try to stop the vandal. Do not place yourself in jeopardy or in a position of liability. Be a good witness for responding officers.

‘Slappers’ A New Kind of Graffiti

Many graffiti vandals use stickers in order to display their graffiti. The vandals call these stickers “slappers.” Often they will take blank stickers or a stack of mailing labels and pre-tag them with their
moniker or message.

They can then use these slappers to place their tag in locations and under circumstances where they cannot readily use a marker or spray paint. Using slappers falls under Nevada’s Placing Graffiti statute because the law describes graffiti as defacement, which includes “affixing” markings to objects as well as defacement with writing or etching. Many graffiti vandals who consider themselves “street artists” do not participate in using slappers because it is considered to be low-class, childish and appealing only to vandals who lack artistic skill.

The use of these slappers however is very prominent in our community and contributes greatly to our overall graffiti problem. Many of these
slappers are placed using adhesive labels which cannot be removed without causing permanent damage.

When I was in LA last week, we went to an underground parking garage in an undersold condo building in Hollywood. That’s where my friend Harry stores his 1910 Overland. I was flabbergasted to see that the entire garage was a graffiti covered work of art.

Harry explained that the owners of the building not only allow it, they encourage it! They even rent out the underground graffiti gallery as a space for raves and parties of all types. Harry went to a fundraiser event for a charity he supports just the week before I was there. It was catered, valet parking, and a dozen of the best artists were on hand discussing their work and giving demonstrations.

I can think of dozens of parking garages right here in Las Vegas that could use some color. 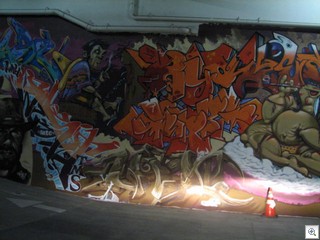 YES, it’s art and as the articles above state, it’s not a crime when it’s done with permission.

I’d love to see some permission based art space for the local aerosol artists.

We could provide an alternative to the storm drains, and the freeway bridges and walls.