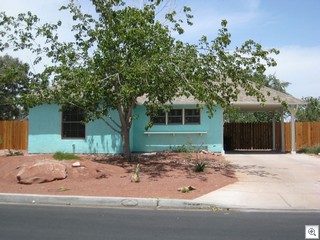 After a year long adventure in restoring and “greening up” an original Huntridge Home, my friend and clients Soeren and Coni are finally finished, and looking for a tenant that’s as terrific as this restored gem.

One of the reasons they bought this property was because it was one of the very few Huntridge homes that still had the original footprint. Almost every other Huntridge Cottage has had the carport converted to living space, room additions to the backs or sides or second stories or a combination of all of the above.

When I first met Soeren and Coni, they told me they wanted to try to re-create an original look and feel, and yet have the home be energy efficient and up to date. We looked at a lot of homes, but only this one got chosen BECAUSE it was truly all original. 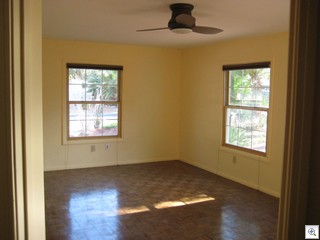 Soeren had researched with several original owners, and found out that they had been delivered by the builder with wood parquet floors, so naturally, that’s what got installed.

He knew that the original windows were wooden double hungs, so he replaced them with the much more costly wooden windows that look original. 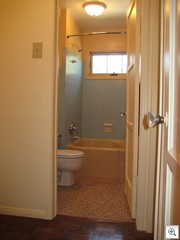 The original “salmon-ish” square tub/shower was intact and in condition, so it got preserved. We explored some other Huntridge homes over the months to find out what the tile work looked like. We found several examples that gave us a blueprint of what the bathroom looked like in 1942 and does once again. I couldn’t be more impressed.

One of the things that I knew for a fact was that the homes were originally built with NO INSULATION! Blown in insulation was added to all walls and the ceiling. 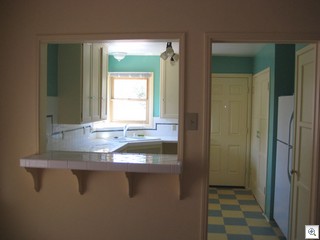 The Huntridge Homes were built during World War II. In that period, kitchens were almost always a separate self contained space. One nice improvement to the original concept was the addition of the window and breakfast bar to open up the view between the kitchen and the living room. A different alternative would have been to remove the wall altogether, which would have created a nice open space, but at the cost of dramatically limiting the counter and cabinet space. I think this is a great compromise. 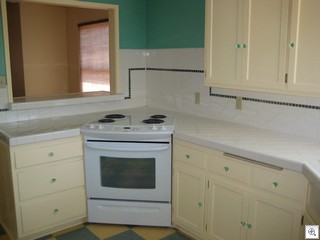 If you or someone you know is looking to rent downtown, I think this one should be really checked out. There’s more pictures and contact information on the website that Soeren created for this wonderful Huntridge restoration.