Veteran’s Memorial To Be Installed At Huntridge Circle Park 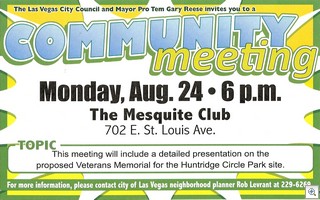 You’re invited to a “Community Meeting” tonight to discuss the proposed Veterans Memorial in the Huntridge Circle Park. The meeting will be at the Mesquite Club, 6pm 702 E. St. Louis Avenue.

There will be a “detailed presentation” about the proposed memorial. We know the city and the non-profit promoters of the Veterans Memorial are serious about this. They built a website and are collecting donations to fill a 1.2 million dollar budget. The City of Las Vegas has also put out an $800,000  “Call For Artists” which I’ve pasted below the fold.

The Huntridge Circle Park is the football shaped island in the middle of Maryland Parkway, just south of Charleston Blvd. It’s been a center piece of the downtown historic neighborhoods ever since it was built in 1942. The most recent history led to the park being closed down in 2006.

Many of us have been pushing and prodding and begging and pleading the city to re-open the park. The city says there’s no money. The City says that the Veterans Memorial is the best option for getting the park open.

Here’s a little background. A whole bunch of us from all the downtown neighborhood associations promoted a re-building and redesign for Circle Park. We held meetings, created a design, obtained grants from the city and county and rebuilt the park. We had a big grand opening party in 2005 and people started using the park.

A church group from Henderson started bringing sandwiches at lunchtime to feed the homeless. The number of homeless people in the area started to increase. There was a big increase in crime in the neighborhoods surrounding the park. One of the burglaries led to the murder of a man in his own home. It was assumed that this murder was related to the “homeless problem” that was being created by the serving of food at Huntridge Circle Park.

Then the City passed a law making it illegal to feed people in public parks. The ACLU won the lawsuit against the city. Then one homeless man murdered another one in the park on November 24, 2006.

That’s when the city closed the park 4 days later. It has remained closed ever since. The excuse for keeping it closed has always been that “there’s no money to open it”, but the truth is, there’s no political will to re-open it until now.

I’ve always been in favor of getting the park opened again.  I’m neutral to the Veterans Memorial. Neutral to whether Las Vegas needs one at all. Neutral as to where it goes. Neutral to it being in Huntridge Circle Park. The City Council says that if they provide the funding to fence the park so that it can be closed at night, the can put the memorial there.

If that’s the best (or ONLY) way to get the park open, then I’m jumping on board to support the Veteran’s Memorial people. You can make donations or otherwise volunteer on their website.

CALL FOR ARTISTS: LAS VEGAS VETERANS’ MEMORIAL, LAS VEGAS, NV
Description
The City of Las Vegas (City) hereby invites individual artist’s or an artist team (Offerors) to submit written Statements Of Qualifications (SOQ’s) to create a profound and lasting work of art in honor of America’s service men and women. The Veterans’ Memorial is being funded by Las Vegas Veteran’s Memorial, a 501 (c)(3) non-profit corporation. The Las Vegas Arts Commission and an evaluation committee will select a finalist that will work with the Las Vegas Veteran’s Memorial in preparing a design. The design will need to integrate an expandable commemorative component, such as a brick walkway, commemorative wall, or digital reader, where donors can pay tribute to family members or others who proudly served in the armed forces. The successful offerors and finalist will also be asked to submit a design for perimeter fencing to surround the entire park. All design proposals will need to be pedestrian friendly, ADA compliant, and vandal resistant to the extent feasible.

The finalist will be required to provide any structural and electrical engineering plans for the memorial, submit the plans for review and approval by the city of Las Vegas, fabricate the memorial, and install the memorial at Huntridge Circle Park. Each Successful Offeror will need to prepare a budget which will include all costs associated with the fabrication, installation, and maintenance for the work of art. The Finalist will be responsible to deliver the artwork complete and fully installed.  All design intellectual property rights, fabrication, labor, materials, transportation, installation, insurance, engineering, landscaping, permitting, and contingency and every other related cost is the sole responsibility of the Las Vegas Veteran’s Memorial which the Finalist will contract through.
Deadline for Submission: October 29, 2009, 1:30pm Pacific Standard Time (PST)
Budget: $800,000
Eligibility: Open to all artists or design groups. No geographic requirements.
Process: Four successful offerors (a.k.a semi-finalists) will be invited to submit design proposals. Each will be required to visit Vegas twice – one time to view the site and another to present their proposal. Each will receive a $5,000 honorarium.
Anticipated Award Date: April 2010
Anticipated Installation Date: April 2011
Web Site: http://www.lasvegasnevada.gov/information/11935.htm – click on ‘request for statements’