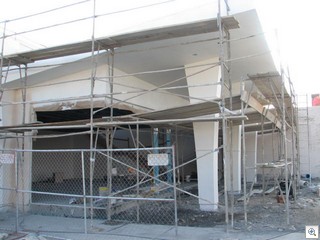 The Brett Wesley Gallery is getting a new building. It’s fun to announce art openings, but this one is EXTRA special because it’s going to happen in a brand new “Mid Century Modern” building. Kristen Peterson told the story in the Sun last week, and we’ve been watching the daily progress. You can watch the finishing touches being complete at the SW corner of Charleston and Casino Center. And best of all….it’s actually going to end up looking as good as the drawings!

We’re watching closely to see if Brett Sperry can get his brand new Mid Century Modern styled building ready for the soft launch opening of the Brett Wesley Gallery that’s been announced for this Thursday, September 10th. from 6 to 9 pm.

I’ve watched plenty of miracles happen, and I think they can pull it off. At worst they can still do the opening in hardhats.

As I’m always reporting, there’s still plenty of momentum for the Downtown Las Vegas Arts District. As we crawl out of this recession, you’ll really see a major comeback and escalation. Quoting from the Sun Article:

Casino Center, the road that connects him to his new gallery, is part of a publicly funded urban trails project that will accommodate RTC’s new ACE bus line. Outside his gallery, new trees, lighting and public art were added to widened sidewalks.

Other movement is afoot. Gaia Flowers, a flower and art boutique, opened on Charleston Boulevard across from the Arts Factory. Globe Salon moved into SoHo Lofts, adding desired downtown traffic.

Valentino’s Zootsuit Connection and Paymon’s Bistro are now open for business in the Arts Factory and Preview Thursdays, held the night before each month’s First Friday, are drawing collectors and locals who are serious about art.

Jennifer Harrington, owner of Henri & Odette Gallery, is part of a team working on a Web site connecting downtown galleries, bars, restaurants and hotels. The site will list events and specials at the downtown spots and include a map to help people move from one place to another.