Congratulations To Some New Residents Of Vintage Vegas

We’ve got some new neighbors in Vintage Vegas! Welcome!

Brandee FINALLY closed on her new home in Westleigh. A hard fought battle, and one I’m real proud to say was worth the fight. We wrote the offer on the short sale on April 1st, and she closed, finally, today. They’re not supposed to take that long.

Jan’s in her new home in Francisco Park! She never believed she could a afford a home of her own for less than she was paying for rent. It was a short sale as well, but everything went like clockwork.

Shawn and Norma are starting the remodel on their new home in Watkins Glen, which is across Viking from Paradise Palms. This was one of the few “not-distressed sale” properties that I’ve sold all year. What a delight! I’d almost forgotten what a real deal looked like!

Soeren and Coni now have another Huntridge home to restore. They like to make them look like they did in 1942, but all greened up and and energy efficient.

Gus picked up a very original gem with hardwood floors in Oakridge.

There’s also a whole bunch of people who are waiting to close, and there’s several offers waiting for responses from the sellers. Homes are selling, and the inventory continues to dwindle.

There’s also all kinds of new insanity in the real estate market. FHA is tightening down on minimum credit scores; underwriters are asking for documentation that we’ve never been asked for before; appraisers are lowballing the deals that seem perfectly fair to the buyer and the seller and the agents. It’s not good for property values when that happens, but the buyers get the house for less than they originally agreed to. It’s a lot of fun out here, playing a game with no rules. But as I’ve said before, it’s a game worth playing!

There’s also a whole lot of fixin’ going on, as well. I see it everywhere I go in Vintage Vegas. The new owners are painting, watering, planting and cleaning. I think the downward trend has ended in both in prices and in the look of the neighborhoods. If you see a terrific transformation that’s in progress or just completed…. give me a call or send an email with the address. I’d like to showcase them. 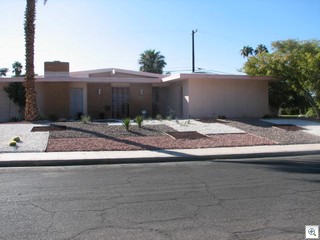 A great example is BOB and TONY in paradise Palms. You can see this house at the corner of Delaware and Mohigan in Paradise Palms. They took advantage of the Water District’s offer to pay you to take out your lawn.  What they did is so easy, and looks so good compared a boring yard of one colored rock. 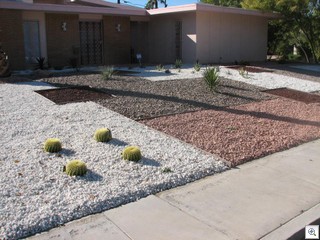 When you drive by, check out the way the squares mirror the pattern in the wrought iron gates.

Congratulations to our new Vintage Vegas Neighbors and to everyone who’s fixing up their places.