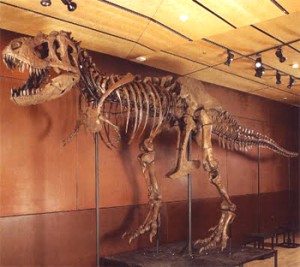 The international auctioneers at L.A.-based Bonhams & Butterfields are holding their first natural history-themed auction at The Venetian on Sat., Oct 3. Up for bid? Gobs of fossilized, long-dead awesomeness, including:

… and the auction’s flagship piece:

Samson is one of the most complete T. rex skeletons ever found, consisting of 170 bones (55 percent of the original animal) including a very intact skull on which scientists have even found evidence of healed injury and disease, providing valuable clues as to how this creature — actually a female — spent its days on ancient Earth. In 2000, the finding fossil hunter tried to sell Samson (then dubbed Z-Rex) on eBay for between $8 million and $12 million. No dice. The skeleton was successfully sold a year later to British millionaire Graham Ferguson Lacey for an undisclosed amount, before then spending a couple years on loan and under intense scientific scrutiny at Pittsburgh’s Carnegie Museum of Natural History.

Now Samson is on the block again, looking for another loving, drenched-in-disposable-income owner who’ll perhaps display her in some cavernous basement rumpus room until, perhaps, said owner finds himself relentlessly haunted by the billowy, CGI-ish ghost of a long-dead superpredator demanding the dignity of proper re-burial.