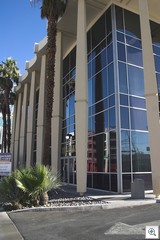 The bus tour which follows the panel discussion is sold out. There’s a waiting list in case of no shows. So you can still get on the waiting list (702-486-5205 x 121). Even if you can’t get on the bus, you ‘ll learn a whole lot about Las Vegas history, and Mid Century Modern Architecture.