I’ve promised all of these a plug. Getting around to all of them isn’t always easy, so we’re doing them all at once.

WWW.lasvegasgirlfestival.com I think the name speaks for itself:

A Showcase of female musicians, artists, dancers, poets, comedians and filmmakers for all ages and genres. 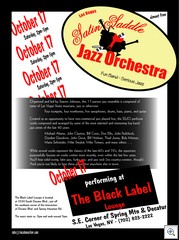 My client and friend Soeren has been secretly building a Jazz Orchestra for the last few years. They’ve been doing it for fun, but are ready for their first gig.

Presenting: The Satin Saddle Jazz Orchestra. Saturday October 17th from 2 to 5pm at The Black Label Restaurant Lounge at Spring Mountain and Decatur.

3 Nights ONLY on Halloween Weekend

(AND every first and third Saturday of the month, as well)

At the Onxy Theatre.

A benefit concert for the Winchester Cultural Center 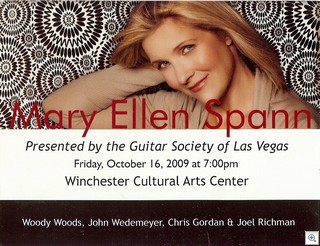 The Mary Ellen Spann Quintet performs the evening of Friday, October 16 in “Starlight and Strings,” a benefit for the Friends of Winchester Park presented by the Guitar Society of Las Vegas and the Las Vegas Jazz Society at Winchester Cultural Center, 3130 S. McLeod Drive. The event begins at 6:00 p.m.

Mary Ellen Spann is an extraordinary jazz singer who ventures into rock and other musical genres with her band: Woody Woods, piano; John Wedemeyer, guitar; Chris Gordan, bass; and Joel Richman, drums. She has appeared at the last two editions of Starlight and Strings, drawing such raves from the audience that she is back once again.

The Friends of Winchester Park support not only the park, but Winchester Cultural Center and its programs. The Friends created the Winchester desert demonstration gardens in two phases over the last eight years.

So many events and speakers! Please visit the official Las Vegas Valley Book Festival website for the complete schedule.

The Vegas Valley Book Festival, the largest literature event in Las Vegas, will be held November 4?–?8, 2009, with most events taking place at the historic Fifth Street School downtown. Now in its eighth year, this annual community festival was founded on the simple premise of bringing together those who write books and those who love to read them. The five-day festival is presented by the City of Las Vegas Office of Cultural Affairs, Las Vegas-Clark County Library District, Nevada Humanities and the Las Vegas Review-Journal.

Keynote Speakers for the Vegas Valley Book Festival are:

The Genius Of Mark Twain 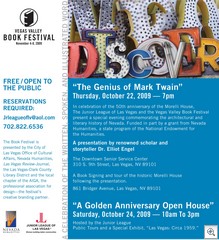 There’s also some pre-festival events, including the Mark Twain Lecture that I mentioned the other day. It’s OCTOBER 22! RSVP’s are required.

On the flyer for the Mark Twain event, they let the cat out of the bag about the Golden Anniversary Open House 2 days later at the Morelli House. It’s OPEN TO THE PUBLIC.

If you’ve never taken the tour of the Morelli House…..make it a point to take the tour. It’s the Crown Jewel of Mid Century Modern Historic Preservation in Las Vegas.

It deserves your time. You deserve to see it.

Saturday November 7th at the Clark County Library at 1401 E. Flamingo. 11am to 4pm

Besides the panel discussions and exhibit hall, there will be screenings of: