I’ve been talking to them behind the scenes for over a month now. A subsidiary of Dupont, called Building Media is going to do a top to bottom rebuild of a home in Paradise Palms. The entire process will be filmed, since that’s what Building Media does. They create training videos for the construction industry. 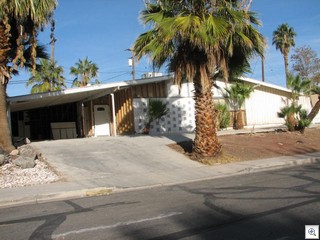 The original home had little attention paid to energy conservation. Green wasn’t even a topic in the 60’s, never-the-less a movement. One of the most important things that can be done to the 50’s and 60’s Mid Century Modern homes is to improve their energy usage, or as they say – the Carbon Footprint. Very few homeowners will ever go to ALL these lengths, but each element that will be used can be applied to any MCM home.

I’ve been consulting with them on the history of Paradise Palms, as well as the architecture and style of the home as it was originally conceived. They’re not “purists”, however. Their goal will be energy related, not perfect historical preservation accuracy. But they will attempt to preserve as much of the architectural and design character as possible. When all is said and done, it will still be a home fitting of Paradise Palms, and will bring major international attention to the neighborhood, and to Mid Century Modern in general.

I’ll be visiting the home – camera in hand– as it progresses, and I’ll try to share with you everything that I learn.  We’ll have a chance to watch the progress, and discuss the concepts, materials and techniques that will be used to obtain a 70% reduction in energy usage in the home.

I’m not supposed to give out the address quite yet, but since I’ve had pictures of this house on VeryVintageVegas in the past, some of you will figure it out. Especially since there’s a huge dumpster in front of it at the moment.

There will be several weeks in January when the home will be hosting bus loads of attendees for various home builder shows, especially the International Builders Show, January 19–21, 2009, which will be held 2 miles away at the Las Vegas Convention Center.

I’ve been assured that the readers of VeryVintageVegas will be offered a private opportunity to view the home once the shows are over. Stay tuned. This should be both fun and educational.