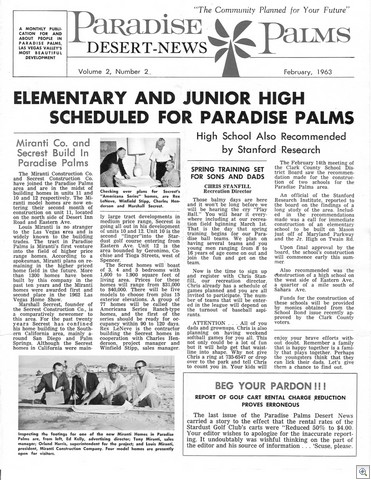 These newsletters were part of the marketing campaign for the Paradise Palms development of “Jet Age” modern homes in Las Vegas. We now refer to 50’s and 60’s modernism as “Mid Century Modern” or “Mid Mod” for short. They were distributed to the new owners by mail, and handed out at the sales office.

Through Maisie’s penchant for saving stuff, we have 8 editions, spanning from February ‘63 thru October ‘63. No one that I’ve shown these to, nor anyone that I’ve ever spoken to has ever seen or heard of them. Perhaps there’s some more editions hiding in a drawer or a in a box in closet somewhere. Getting these out in the open may well help us find some more.

They’re really worth taking a few minutes to read, ESPECIALLY page 2 of each edition which highlights new owners and their families. Amusingly (from a 2010 perspective), they tell the names and addresses, and even the ages of the children when they’re pictured.

In the dots and dashes columns of page 4 in this edition you’ll find announcements of all kinds including! “so and so will be on vacation for the next two weeks”. 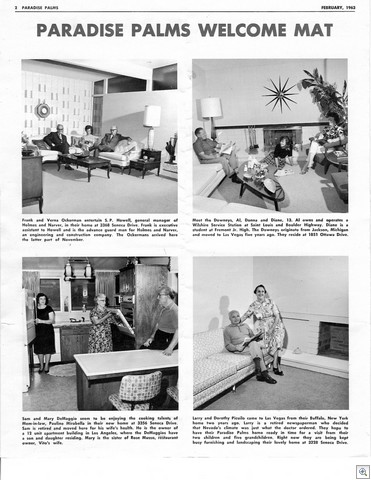 In our upcoming editions, you’ll see lots of great Mid Mod Furniture and Decor. I’m getting a kick out of the hairdos and the clothes, as well. 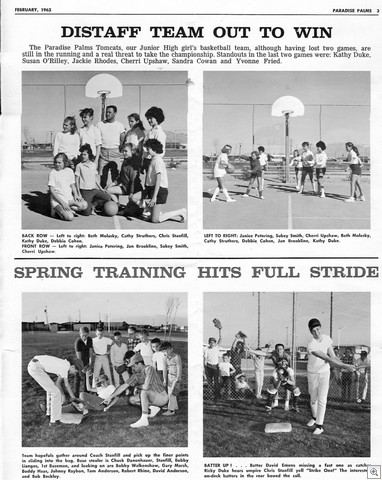 Just in case you’re new to VeryVintageVegas, or Las Vegas, you can find the Paradise Palms Neighborhood on both sides of Desert Inn Road, between Maryland Parkway and Eastern Ave.

There’s also 2 cul-de-sac “fingers” that extend into what is now the National Golf Course. Those are accessible from Eastern Avenue, between Desert Inn and Viking. The streets are Pueblo (where the ReVision House is located) and Tioga way that leads back to a street called Cochise where you’ll find the “Casino House”.

The south edges of Paradise Palms are along Viking and Mohigan.

The 3rd Finger Ottawa Drive is accessible from Spencer, just north of Twain. 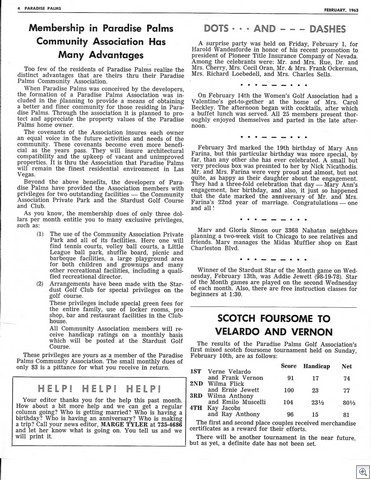 Paradise Palms had a Homeowners Association when it was first built. I’ve always known about the “Paradise Palms Community Association”, but don’t really know what year it was voted out of existence.

In the article to the left is also reference to the community park that once existed in the middle of Paradise Palms. It the south side of Chippewa Avenue, and what’s now the the houses on Chippewa Circle. The east end of the park came over to Spencer and the power lines.

The association fee was THREE dollars a month! “a pittance for what you receive in return!”