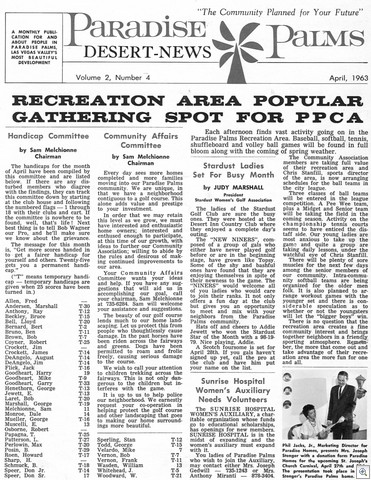 Someone â€“ quite wrongfully â€“ suggested that Iâ€™m focusing too much attention on Paradise Palms. They asked me why I havenâ€™t done anything on downtown latelyâ€¦.or McNeil or McWhatnot.

Iâ€™m just very happy to be back to consistent and regular blogging, and the â€œRevision Houseâ€, as well as these Paradise Palms newsletters and brochures from 1963 were just the thing to get me jump-started.

Another reader posed a good question recently. She did some driving around in Paradise Palms, noting that some of the properties â€“ in fact, some of the blocks looked kind of shabby.

I explained that sheâ€™s quiteÂ right.Â  However, thatâ€™s true in neighborhoods all over the valley after the last 3 years of market decline, recession, and all that other bad stuff.

Thereâ€™s dead lawns and peeling paint in Summerlin as well. The HOA there has more power to fight it than we do considering the budget constraints of the city and the county.

Never the less, thereâ€™s a TON of foreclosures that have been sold during the last 6 months. (AND A TON OF THEM BEING RELEASED AT THIS MOMENT â€“Â IF YOU HAVENâ€™T BOUGHT YET! The shadow inventory is starting to emerge.)

Most of the people who have already taken advantage of the low prices and the low interest rates have been putting their time and energy into fixing and repairing and redecorating the insides this winter.Â

With Spring approaching, I think weâ€™ll be seeing a torrent of outside activity among the many new homeowners.

First however, I think weâ€™re going to see the biggest crop of weeds ever. It just might get uglier for a few months before the lawns and landscapes start to look good again. Of course, we needed the rain, and the logical (natural) outcome will be weeds.

So Iâ€™m taking a moment to start the appeal early. I saw my first littleÂ green shoots of growth this weekend.Â TheyÂ were in the fringes of A NICE LAWN. Â Whether youâ€™re Downtown, or in McNeil, or Westleigh or Scotch 80â€™s or FranÂ Park, or EVEN in Paradise Palmsâ€¦.get an early jump on them, and stay ahead of them. Go talk to your neighbors. ENCOURAGE THEM to stay ahead of the weeds. Help a neighbor who might not be able to pull them.Â Your HOME VALUE will benefit. Lots and lots of those vacant properties are going to get new owners soon. The better the homes around them look, the more theyâ€™ll be fighting over the available ones. The FIRST thing they always do is pull the weeds at their new home. 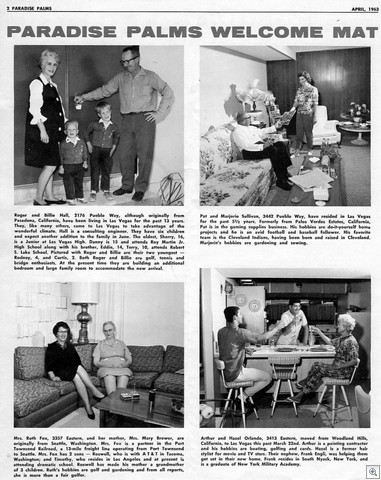 There wasnâ€™t a lot of news in this issue of the Paradise Palms â€œDesert â€“ Newsâ€ â€“ therefore the little essay above, butâ€¦. 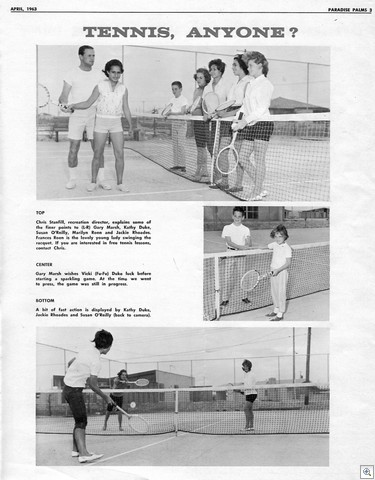 I do believe we should try to track down Fu-Fu.

Is she still around?

We know from a previous issue that the tennis courts were in the park that ran westward from Spencer along whatâ€™s now the South side of Chippawa Drive, and Chippawa Circle. I believe the pyramid roof house that shows in the background of the the top â€œtennis anyoneâ€ picture is at the end of the Commanche Circle Cul-de-sac.

The butterfly roof â€œclubhouseâ€ in the bottom picture seems to be where Chippawa Circle is now.Â What a shame itâ€™s now lost to us. 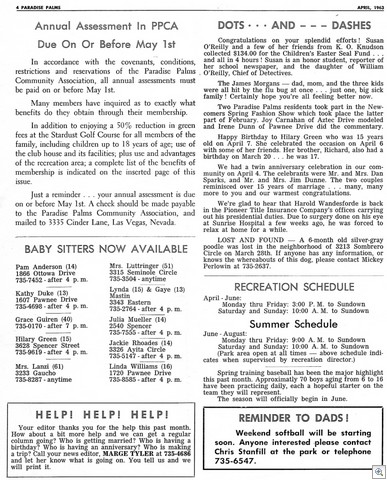 Iâ€™m trying to figure outÂ EXACTLY when the association for Paradise Palms was dissolved. Does anyone know? Any details? Was there a fight over it? Was the community thrilled to lose it? Who led the different factions. I just know there had to have been a battle. Any of you original or extremely long time owners have any insight?

The ONLY clue I have at the moment, is that all 5 houses on Chippewa Circle were built in 1979, and are absolutely NOT part of the brochure series, as they are on the North side of Chippewa Drive. So I know it had to have been at least a year or two before that. But when? Why?

TomorrowÂ or WednesdayÂ Â â€“ Plan 5 of the brochure series.