Itâ€™s theÂ hand drawnÂ renderingÂ of Paradise Palms from 1963. It was also handed out at the sales office, which I now know had a Desert Inn Address, though it was the lastÂ lot at the end of Dakota Circle. Was it in the house thatâ€™s there now? A trailer?Â AÂ different building that was replaced with house?

Having stared at this mapÂ for hours over the last few weeks, itâ€™s alsoÂ created all kinds of new questions. Iâ€™mÂ trying to put together all the pieces of the puzzle. Iâ€™ve had to go back into the county records to discover that the unlabeled segment containing Aztec and Cayuga are really â€œunit 2â€. The west half of Sombrero, Raindance and Scout Street (which doesnâ€™t exist, and is called Raindance now) are really unit 15. Sombrero Avenue goes straight thru from east to west from La Canada to Eastern. Whereâ€™s La Canada?

Obviously, this wasnâ€™t the final version of the map. The Unit 15 homes were built in â€˜64 and â€˜65. Theyâ€™re mostly ranch styled mid modâ€™s. Someday Iâ€™ll figure out the whole puzzle. If anyone has any cluesâ€¦..please send them my way. 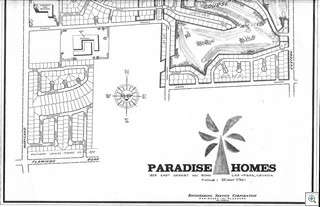 The map does help us see where the park once was. And you can see in the bottom left hand corner, that there was another whole group of homes that never materialized. That area is nowÂ apartments.

Unfortunately,Â the mapÂ was printed on 11×17 paper which didnâ€™t fit in my scanner, so I did it in 2 parts. In retrospect, I should have taken it somewhere with a bigger scanner. Maybe someone with some photo shop skills will do us a favor and put it back together as one full map.

I hope youâ€™ve enjoyed seeing the 1963 brochures and newsletters as much as I have. Now itâ€™s time for some coverage of some other neighborhoodsâ€¦..and some Mystery Pictures.