That was hard to fit into one headline, but here’s the whole scoop, totally borrowed from Brian Paco Alvarez’s blog about all things cultural in Las Vegas – EnculturateVegas.

“Vegas Spectacular” an exhibition at the World Market Center… TONIGHT ONLY…

Vegas Spectacular: From the Stage to the Strip

An exhibition by Brian Paco Alvarez, 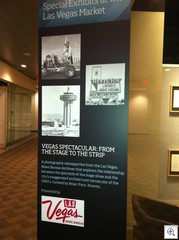 A photographic retrospective from the Las Vegas News Bureau Archives that explores the relationship between the spectacle of the stage show and the city’s exaggerated architectural vernacular of the 1960’s.

This exhibition explores the relationship between the stage performances and spectacles that have defined Las Vegas as the Entertainment Capital of the World, and its unique architectural vernacular. From its earliest development as a resort destination, Las Vegas attracted visitors with famous entertainers and over-the-top stage spectacles. The resorts competed with each other by bringing in the biggest names in entertainment and would go as far as importing famous shows from Paris, France to perform in their showrooms.

Over time this one-upmanship spilled off the stage and onto the famous Las Vegas Strip. The hotels began developing signage to advertise their stage performances. The relatively modest roadside signs of the 1950s evolved into monumental signs that grew by hundreds of feet. By the time the 1960s came about the resorts were out doing one another with enormous marquees emblazoned with flashing neon and chasing lights. Eventually the resorts themselves became the spectacle and the Strip became its stage. 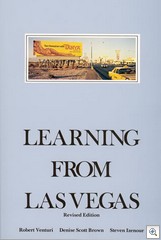 The exhibition will be open to the public TONIGHT ONLY (Tuesday, January 25) during the preview screening of the film Bob and Denise, a documentary about architects Robert Venturi and Denise Scott-Brown authors of the seminal book on Las Vegas – Learning from Las Vegas. In addition there will be a preview of the short documentary Saving Lieb House and an exhibition of drawings by Robert Venturi. Jim Venturi, son of Bob and Denise will be present during the screening.

The event will take place this evening at the World Market Center at 6:30 p.m., as part of the Las Vegas Market Design Series. The event is free and open to the public. Building C, Room 301

There’s more….. here’s the press release about the whole exhibit and event:

(LAS VEGAS)—January 12, 2011—Learning from Las Vegas was one of the most influential architectural books of its time when it was published in 1972. Now, authors and architects Robert Venturi and Denise Scott Brown are the subject of Bob and Denise, a documentary by their son, Jim Venturi. A preview of the film will be screened along with Saving Lieb House, a short documentary, also by Jim, during Las Vegas Market, January 25, at 6.30 p.m., as part of the Las Vegas Market Design Series.

Learning from Las Vegas embraced the iconic signs and buildings of the Las Vegas Strip, touting what was considered the “common” design elements as a precursor of what was to come throughout the country. Their point of view was polarizing to critics and designers, alike.

“This highly controversial book stirred up huge debates at the time of its publication and caused all sorts of arguments between critics–some of whom will be seen in the film,” says Margaret Casey, director of programming for World Market Center Las Vegas.

Robert and Scott Brown considered Las Vegas a prototype for 20th century American suburbia, and the book provided a new lens through which to view the controversial architecture of the Las Vegas Strip. The book remains a mainstay in college curricula and every day architectural conversation. The film shares the insights and opinions of the minds behind the book.

Casey said viewers can also look forward to amazing footage of vintage Vegas casinos, along with a reception and the exhibit “I AM A HOUSE: 2007” featuring 26 prints by Robert Venturi on loan from the Collection Museum of Contemporary Art San Diego, as well as a photographic retrospective presented by the LVCVA. Curated by Las Vegas resident Brian “Paco” Alvarez, “Vegas Spectacular: From the Stage to the Strip” features images from the Las Vegas News Bureau archives that capture Las Vegas casino architecture, headline entertainment and iconic Neon signage and explores the relationship between the spectacle of the stage show and the city’s exaggerated architectural vernacular from the era.

The preview screening will be the film’s debut in Las Vegas, and is free and open to the public. Casey says that World Market Center Las Vegas is privileged to host this screening in the city that gave the book life.

“Because Las Vegas architecture and design was pivotal to Jim’s parents’ careers, and almost every student of architecture or design has been influenced by the book Learning from Las Vegas, I thought it would be meaningful to bring it ‘home,’ so to speak,” says Casey.

The other film, Saving Lieb House, is a short documentary directed by Venturi and John Halpern, following Robert and Scott Brown as they scramble to save their iconic pop-art creation, Lieb House. The two-story, box-shaped home located in Barnegat Light, New Jersey, became a symbol of modernism after it was built in the late 1960s. When the couple learns of plans for its demolition, they have 10 days to find a way to save it. The film follows their brief crusade—including a 97-mile barge ride—while capturing the enthusiasm of New York City as its residents cheer them on.

The presentation and screenings will take place from 6.30 to 8 p.m. January 25 in Building C, room C358. A meet and greet reception with Jim Venturi will follow. Attendees should RSVP to [email protected] to ensure a seat.