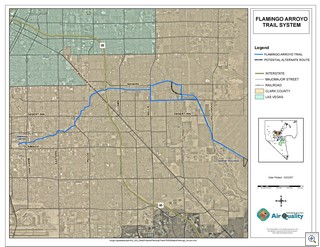 Vintage Las Vegas is the center urban core of Las Vegas. It’s not just downtown where we find the historic neighborhoods or the Mid Century Modern Homes of the 50’s and 60’s. The Flamingo wash cuts thru many of the great historic neighborhoods of the southeast part of Vintage Vegas. The first of several trailheads and parking lots are now open to the public.

The project a 2.5 million dollar public works project which will eventually run from the UNLV campus all the way to wetlands park. 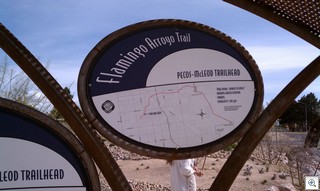 In Paradise Township we have a terrific new feature. It’s the Flamingo Arroyo Trail. (There’s an old real estate joke that says if you’re selling it, it’s an arroyo, and if you’re buying it – it’s a wash). The new trail head is finished on Pecos-McLeod at Emerson, and this last week the pedestrian bridges over Desert Inn Road at Mohave were installed.

The project a 2.5 million dollar public works project which will eventually run from the UNLV campus all the way to wetlands park. 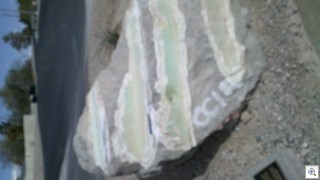 The trailhead on Pecos-Mcleod features several shelters as public art, signage and was built with lots of the rubble from the stardust. This is a big chunk of the steps from the swimming pool with it’s still embedded tile work. The graffiti was not there when it was part of the Stardust. I called Clark County, and hopefully the graffiti will be gone when you get there to see the Flamingo Arroyo Trailhead for yourself. 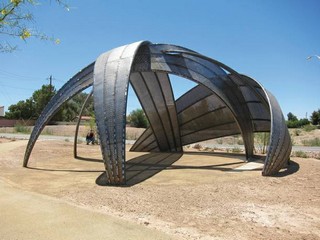 The Las Vegas Weekly featured one of the shelters in February in their Art Along The Way page. 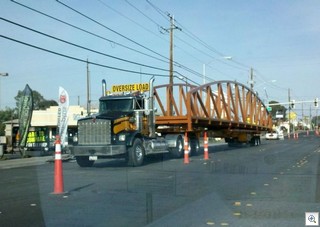 I happened by as the 3rd segment arrived by truck. I waited around as long as I could to see it being craned into place, but I had to leave before it happened.

Desert Inn Road will always provide a reminder that it’s time to park the car and take a nice walk along the arroyo. 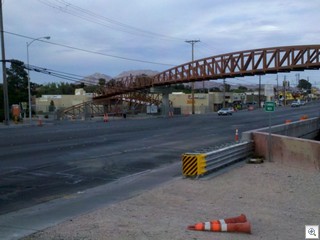 While the weather is still nice, take a walk and check out the view from the new bridges over Desert Inn Road.

Hopefully I’ve broken the logjam at VeryVintageVegas, and are back to blogging regularly about the Historic Neighborhoods, Mid Century Modern Homes and Urban Las Vegas Living.

You can’t imagine how good that makes me feel. It’s about time.