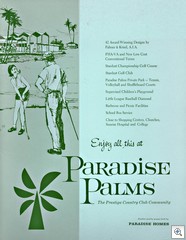 Last year, I uncovered some of the newsletters, and parts of the sales brochures from the Mid Century Modern Neighborhood of Paradise Palms. 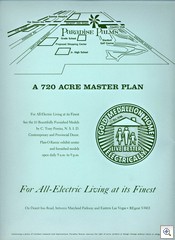 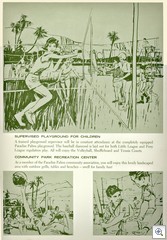 Here’s one of the inside covers. I would think there would be another inside back cover as well.

The Paradise Palms Home Owners Association Is No Longer In Existance

In the early 70’s, the Paradise Palms Community voted to abolish the homeowner’s association. I’ve been told that it happened both in 73 and 74.

With the HOA defunt, the community park was closed and the land was re-developed for the last homes to be built in Paradise Palms. Those homes are distinctly different and have the feel of the 70’s and 80’s. You can find them on the south side of Nakona, just west of Spencer.