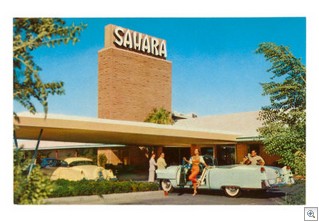 There’s been plenty of coverage, and not much left to say about the Sahara Hotel.

Our old friend Lynn at the Classic Las Vegas Blog has lots of fun pictures, and some great memories of the Sahara.

Quoting from Classic Las Vegas: “When the Sahara opened in 1952, the Las Vegas Strip was much different from today.  The El Rancho was across the street, the Hotel Last Frontier and the Flamingo were further down the two lane highway.  Owner Milton Prell called it, “a jewel in the desert.”  He brought in comedian Stan Irwin as entertainment director and comics like Don Rickles and Buddy Hackett rotated the Casbar Lounge with Louie, Keely and Sam.It was a mythical era in Las Vegas history and the Sahara had a major role in that mythology.”

The Review Journal did a nice tribute video to the Sahara Hotel and it’s history on Friday. They also have a timeline of the historic events surrounding the Sahara, including it’s opening in 1952; when the Beatles stayed there in 1965, and when Dean Martin and Jerry Lewis were re-united during the 1976 MD Telethon. 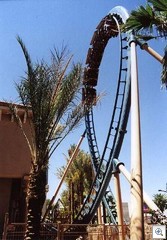 Personally, I’ll miss “SPEED” – my favorite roller coaster ride in Las Vegas. I’ve ridden it at least a dozen times over the years.