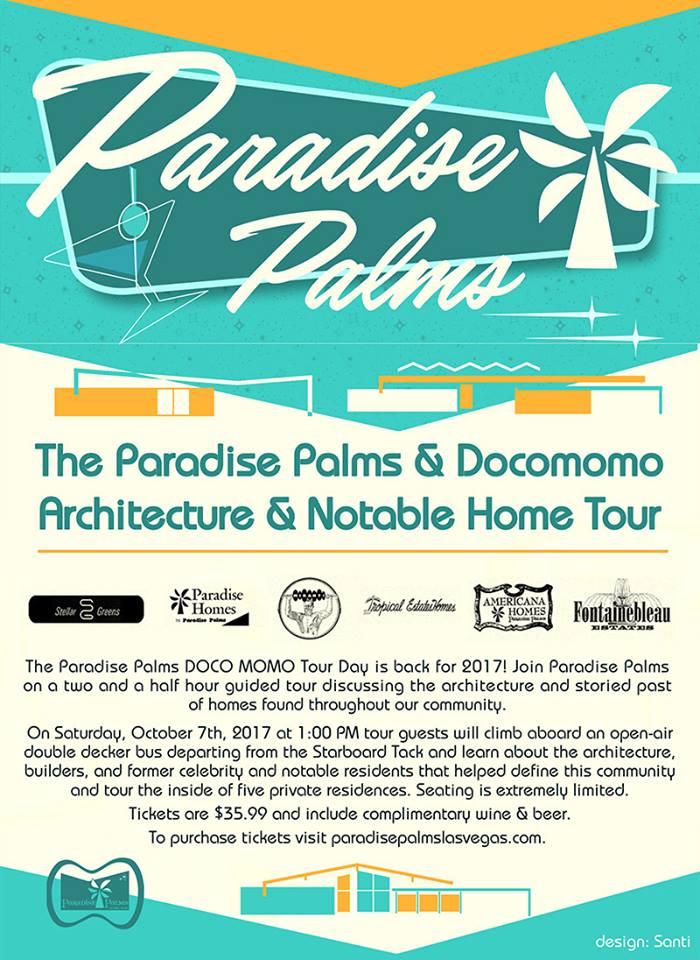 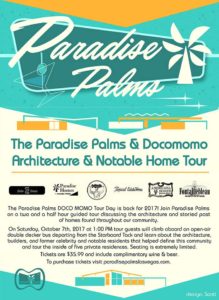 The Paradise Palms DOCOMOMO Tour Day is back for 2017! Join Paradise Palms on a two and a half hour guided tour discussing the architecture and storied past of homes found throughout our community. On Saturday, October 7th, 2017 at 1:00 PM tour guests will climb aboard an open-air double decker bus departing from the Starboard Tack and learn about the architecture, builders, and former celebrity and notable residents that helped define this community and tour the inside of five private residences. Seating is extremely limited – Tickets are $35.99 and include complimentary wine & beer.

Paradise Palms is a historic Mid Century Modern neighborhood built by Irwin Molasky Homes and the architectural team of Daniel Palmer and William (Bill) Krisel of Palmer & Krisel from the early 1960’s through the early 1970’s. This particular tract was the first planned community in Las Vegas. It won the American Builder Magazine Award for being one of the best planned communities in the U.S. The neighborhood is growing as a Mid-Mod preservationist Mecca in terms of restorable P&K homes still at relatively affordable prices. While other communities such as Scottsdale, AZ and Los Angeles and the Bay Area, CA, have embraced Modernism and make money from it, Las Vegas has been slower to catch on, though the recovery is well under way.… The tour hopes to open eyes to this undiscovered treasure that lies right in the heart of Las Vegas.

Mid-Century Modern (MCM) is a period in the middle of the 20th Century where architectural design reached a peak in terms of aesthetics, engineering and exuberance. The dates are 1945 to 1965, although the era is sometimes extended from the 1930s through the 1970s. Because it centers on the period after World War II it is also known as Post War. The term may also be shortened as Mid-Mod.

Paradise Palms began in 1961 as the neighborhood surrounding the Las Vegas National Golf Club. The course has enjoyed an illustrious past beginning as the Stardust Country Club designed by Bert Stamps in 1961. Arnold Palmer set the course record of 63 in 1967 and held that record for 28 years. Over the years it has hosted LPGA Championship Events and PGA Tournament of Champions. The Las Vegas National Golf Club is a true Las Vegas landmark… Steeped in a rich history and tradition.