A New And Revitalized Urban Core For Las Vegas

Throw back Thursday   From April 2008 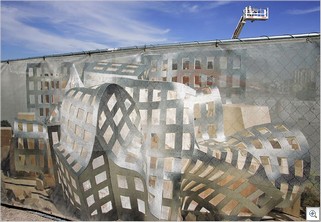 Last week, at the official groundbreaking for Union Park, Mayor Goodman was waving a New York Times article about the project.

I’ve had the link to it since then, but didn’t realize that it was written by my friend and client Steve Friess, who’s one of the most published freelance writers working out of Las Vegas. Steve’s Blog is always full of scandal, dirt, and behind the scenes news about Las Vegas and The Strip

LAS VEGAS — As other cities look to replace their blighted downtowns with new development, Las Vegas, known for its extravagant facsimiles of European and American landmarks, has come up with an unusual approach: Build another downtown, right next to the decaying one.

On Thursday, the city will formally inaugurate a new urban core on a 61-acre, undeveloped parcel of land — a project that some experts say is unprecedented in city planning. Called Union Park, its supporters hope it will revive the historic downtown just to the east, where the region’s courthouses, government offices and oldest casinos are clustered.

More than $6 billion in mostly private money has been announced for five ambitious projects: an Alzheimer’s research center, designed by Frank Gehry; a 60-story international center for jewelry trading; a hotel by the celebrity chef Charlie Palmer; a casino-resort; thousands of residential units and square feet of office space, and, as its centerpiece, a $360 million performing arts center.

Construction on the rippled Gehry building and utility lines is under way on this former brownfield, once a chemical dumping ground for the Union Pacific Railroad.

Here’s the whole article: Up With The New: A Second Center City for Las Vegas, by Steve Friess, in the April 23 New York Times.

All of us at Very Vintage Vegas believe that Union Park, as well as most of the other development in downtown will be good for all the neighborhoods surrounding downtown.

We want to congratulate Mayor Goodman pushing things along, and wish him and all the city the best for a revitalized and exciting urban core of Las Vegas