Shall Article 1 of the Nevada Constitution be amended to require the Legislature to provide by law for the establishment of an open, competitive retail electric energy market that prohibits the granting of monopolies and exclusive franchises for the generation of electricity?

Nevada Constitution should NOT be amended

No other state that has deregulated changed their constitution to do so.  When the backers of deregulation were asked why Nevada needs to add this to the state constitution their explanation was the Legislature would not be able to change the law if things did not work as the public or Legislature thought it would. It would take five to six years to reverse the actions of changing the constitution.  Yet, this same change to the Constitution requires the Legislature they don’t trust to rewrite hundreds of laws pertaining to our electric service and establish new rules/laws for a deregulated market.  In other states that have deregulated, it took them five years or more to do this with full-time Legislatures yet they are only allowing Nevada Legislatures three, 120-day sessions to accomplish this great feat.  Anyone remember that it took the Nevada Legislature Fifteen years to write the rules for legal marijuana after the voters approve it?    If it was so good the voters should vote to pass it and then let our Legislatures work out the details without it being locked in the Constitution. This is NOT something that we should be tinkering with the Nevada State Constitution for. We will lose all current state protections with deregulation.

Competitive retail electric energy market does not mean lower prices.  There were a select group of cherry-picked cities that did see a 14% decrease in their KWH rates but overall that was not the case.  Nevada has seen a 15% decrease in power rates since 2009.  Most deregulated states are still higher priced than what we pay in Nevada. 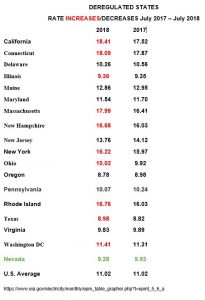 As you can see in the image most of the deregulated states have seen increases in the last twelve months. Most of them also are higher prices than we currently pay in Nevada.

Supporters of deregulation say that we can not compare Nevada prices to deregulated states. They have provided two reasons for that.

Second.  Using the reported averages to the federal government is an average of each state.  The supporters once again say you can’t compare since some people pay less and some pay more depending on the plans that they choose.  We have the same thing here in Nevada though.  NV Energy offers different plans that we are free to choose.  Some residents pay as little as 5 cents per KWH while others choose plans that cost 12 cents per KWH.  They pick what works for them.  The supporters want to cherry pick the low rates in deregulated states to show savings even though most people are not getting those low rates and savings.

Deregulation does not always work

These states passed bills to deregulate but never implemented deregulation after exploring it.

Montana deregulated, then went back. Deregulation costs state hundreds of millions of dollars

Texas, the state that the deregulation supporters use as a prime example but they leave out a lot of the details.  Here is what is really happening in Texas reported by the press in Texas.

One-year fixed price offer on the Power to Choose website has climbed more than 20 percent over the past year. Electricity prices expected to skyrocket this summer.

“There is a possibility that we may have what is called rotating outages,” said Dan Woodfin, ERCOT’s senior director of system operations.  Texas’ power grid operator won’t rule out rolling blackouts as tight supply meets high summer temps.

Commissioners asked staff in June to look at tweaks after finding plans what appeared cheap but would cost consumers four or five times as much as promoted.  Texas regulators improve Power to Choose website but threaten to scrap it if changes don’t work.

Nevadans for Affordable Clean, Energy Choices, also known as Yes on 3, is leading the campaign in support of Question 3. Matt Griffin, a lobbyist for The Griffin Company, is the author of Question 3 and chairperson of Yes on 3.  Switch & Las Vegas Sands Corporation are the two main financial supporters. As of Oct. 6, 2018, they had spent $22 Million to pass Question 3.  Neither one of them are customers of NV Energy.  Switch is primarily in the Data Center business but they also have become Electric Power Producers. They want to sell you power.  Switch alone has spent more money than NV Energy’s $12 Million to see that Question 3 passes.  NV Energy may have budgeted $30 Million as the Yes on 3 commercials state but they have not spent anywhere near that at this time with the election three weeks away.

NV Energy has stepped up their donations and spending along with the Sands Corporation.

It is explained best by The Nevada Independent