Uncle Jack's Very Vintage Vegas – Mid Century Modern Homes, Historic Las Vegas Neighborhoods, Las Vegas History and Urban Living by Jack LeVine – What would it take to trigger a housing downturn in the second half of 2020?
.

What would it take to trigger a housing downturn in the second half of 2020? 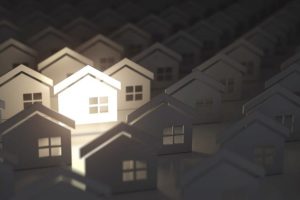 Plus, how likely –or unlikely– any of these events happen…

At its beginning, the COVID-19 crisis had many consumers and housing professionals alike bracing for a housing crash. And with good reason: We were, and are, facing the biggest health and economic shock in recent modern-day history.

But what many didn’t account for was that the U.S. housing market was somewhat inoculated against the economic turmoil of the COVID-19 crisis by having great demographics for housing along with long-standing low mortgage rates.

U.S. demographics in the years 2008-2019 were too young and too old to generate strong demand for home purchases, and this was one of the reasons we had the weakest housing recovery ever recorded in history, even with low mortgage rates. In fact, MBA purchase applications, adjusted to population, were lowest in 2014, five years into the last expansion with mortgage rates under 5% for most of the cycle. 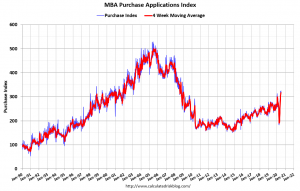 As shown by the purchase application data, the housing market had a “V-shaped” recovery.  The housing bears, though, are saying this V-Shape will turn into a W, meaning there will be another significant downturn. Just because the housing bears have been wrong for the last seven to eight years doesn’t mean that they will be wrong this time as well.

To that point, I thought it would be useful to outline what would need to happen in 2020 in order for there to be a steep downturn in the housing market.

1. Fear of the virus spirals out of control

If a resurgence of infections results in a paralyzed market once again, more Americans will skip the home buying or selling process until a vaccine is in play. Keep in mind that purchase application data is about to run into its seasonality time frame where the total volumes will fall. However, as long as we stay flat to positive for the rest of the year we will be ok in 2020.

2. Desperation selling with no demand to pick up the inventory through 2020

Since the year is more than half over and we have not seen any desperation selling despite the huge shifts in employment, I don’t believe this is likely. Homeowners today are in a much better position to avoid desperate selling. We didn’t have a credit consumer bubble going into this crisis. Homeowners have much more nested equity and better financial profiles. Additionally, forbearance programs are available for homeowners who have lost employment due to the COVID-19 crisis.

By 2021, we will be able to determine if these forbearance programs have prevented distress, income loss or equity needed selling. Because a lot of homeowners from 2010-2017 have good nested equity and U.S demographics are solid for housing, I do not expect demand to drop dramatically and supply to increase as we experienced during the bubble bust years of 2006 to 2011.

Due to high unemployment, we will see more foreclosures and short sales then we had before the COVID-19 crisis but because this will be balanced with a decent demand due to better demographics, I don’t expect a nationwide home price crash like many have talked about over the years.

The third thing that would need to happen in order for the V-shaped recovery in housing to take a downturn would be for the U.S. government to tighten lending.

Today, credit is tighter then it was before the COVID-19 crisis, but standards are still liberal for well-qualified buyers.

In a few interviews this year, I talked about credit getting tighter after the mortgage meltdown in March but this only affected 4.5% to 6.2% of all loans that could have closed before March 9. The Twitter housing bears overplayed the tight credit thesis in an effort to foment fear of a housing collapse, saying that a lot of loans would be affected instead of 6%.

The housing bears need infection rates to skyrocket, desperate sellers, and tighter government standards for lending in order for the U.S. housing market to snatch defeat from the jaws of victory in 2020.

Because homebuying is a process of many steps, the COVID-19 crisis will have an impact on housing for years to come. This is a given.

It is also a given, however, that we still have over 138,000,000 employed workers – and this is only the non-farm payroll data that represent the majority but not all working Americans. Yes, we have suffered tremendous job losses, but we still have a large working population. We want to get back to having over 160,000,000 people working as we did in February 2020.

Just remember the existing home sales market needs only 4 million mortgage buyers per year to keep demand stable. As long as purchase application data stay flat to positive on a year-over-year basis, housing should be okay for the second half of the year. In 2021, we will have a new set of variables to deal with.