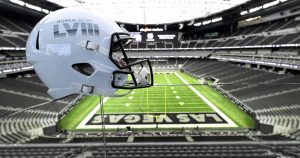 Las Vegas Convention and Visitors Authority CEO Steve Hill called the announcement a “defining moment in the history of Las Vegas” and promised it would be “the most electrifying sports spectacle ever.”

Raiders owner Mark Davis announced Wednesday that the sport’s biggest spectacle will be held inside of Allegiant Stadium, the home of the Las Vegas Raiders, on Feb. 11, 2024.

“The Raiders are thrilled the National Football League has selected Las Vegas to host Super Bowl (58) LVIII in February 2024,” Davis said in a statement. “Hosting the 2022 Pro Bowl..The 2022 NFL draft.. And now the 2024 Super Bowl are just some of the ancillary benefits resulting from the public-private partnership we created with the state of Nevada to bring the Raiders to Las Vegas and build Allegiant Stadium. It’s only the beginning..

“But for now … Las Vegas … The Super Bowl is coming to the Sports and Entertainment Capital of the World!”

Gov. Steve Sisolak, who as a Clark County Commission chairman was an early backer and proponent of the stadium, predicted the Super Bowl would create thousands of full- and part-time jobs and generate millions of tax dollars “that will be reinvested in supporting our local communities.”