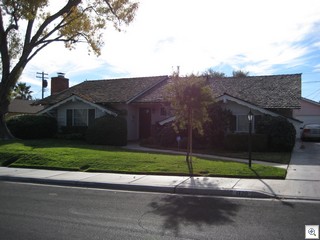 Fran and Earnest for starters, though they’ve actually lived in the house for over a month, they’re now homeowners. Congratulations. They’re the buyers of my listing at 1720 Bracken.

I’ve mentioned them along the way, as it was this house that had the totally crappy unfair appraisal that I ranted about 2 months ago.

They were also part of the little “fictional” rant that I did the other day about why the underwriter wouldn’t sign off on the file and send it to the closing department.

That story was actually about 2 different properties, each with a buyer and seller. In the case of Bracken, even at the last minute, even a week after we were supposed to be closed, the underwriter told us that the buyer’s agent needed to initial a block on the original offer. Technically the buyer’s agent wasn’t supposed to check it, and hadn’t since it had to do with having the  earnest money “in hand” when the offer was made. Of course, he got the earnest money the next day, and turned it into escrow promptly, as required. The underwriter had the receipt from escrow. She had a copy of the check. She had that contract for 2 months! But she had to find SOMETHING to make us all miserable instead of happy. At least we were able to find the buyer’s agent on short notice, or we’d have had to wait yet another day.

Susan and Steve are also moving to Vintage Vegas. They’re buying in the Forest Hills Townhome Community that Liberace helped to develop. I’ve got Liberace’s personal townhouse listed, by the way, and one of you could live in that fabulous piece of VeryVintageVegas as well.

Susan is the very first person to contact me thru a google search for “retro homes in Las Vegas”! This link takes you to a series I was doing last summer on the old blog. It’s called “The Susan Saga”, and makes for a pretty darn good read. The story I’m telling you now is really the latest chapter in her dream of living in Vintage Vegas.

It’s taken a year now from that first contact. First she had to sell her home in Spokane. It took a LOT longer than she thought it would, but it closed last week right on schedule. It was her moving van that wasn’t going to have anywhere to unload, which prompted the rant last week.

Friday night at 4:45pm we got notice that the underwriter decided that the appraisal wasn’t right, and that they wouldn’t loan based on the appraised amount, which was the same as the sales price. IN FACT, that’s what held us up 3 weeks ago, when she said the same thing about the FIRST appraisal. Yes, we did a SECOND appraisal, with an appraisal of HER choice, who agreed with the first appraisal. Since we hadn’t heard anything more about the appraisal question, we didn’t know what the hold up was. That’s also what prompted my fictional tale.

We negotiated all weekend with the seller to allow Susan and Steve to rent for a week or 2 while we submit the entire loan package to a new lender. Screw the old one.  At least the truck will be unloading into the new home, and we have another wonderful new neighbor in Very Vintage Vegas.

“Ken and Barbie”, who are really Dana and Mark finally signed their loan papers yesterday morning for their new ranch house. The seller showed up to sign yesterday afternoon and promptly walked out  declaring that she isn’t getting enough money since she had to make an extra payment. She’s demanding a “penalty” and won’t sign if she doesn’t get it. She calls it a penalty. I call it extortion. Can you say “lawsuit”?  I’ll get that one straightened out today, somehow. The moving truck is “tentatively” scheduled for Friday.

THERE’S A MORAL TO THESE STORIES!

Even though buyers are now buying and the sellers are now selling (at no where even close to what they’d have gotten 2 years ago), the BANKS AND LENDERS ARE STILL MAKING IT HARD TO BORROW.

Whether you’re one of the many people I’m working with, or one of the very many who haven’t contacted me yet, but are reading along while you get ready to…

YOU’VE GOT TO HAVE YOUR DUCKS IN A ROW. You’ve got to have thick skin. You’ve got to have a backup plan in place ahead of your moving date in case things like this happen to you. We’re eventually getting the deals closed, but contract dates and moving truck dates mean NOTHING TO THE BANKS.

Fran and Ernest, Matt and Jen, Steve and Susan, and Father Jerry have all been champs. They’ve rolled with the punches, kept their tempers in check, and did what they had to do. I congratulate them all for their perseverance.