Jack LeVine RANTS About The Banks, And How They Make The Housing Crisis Even Worse

This is part 3 of the series I started on Tuesday. RAVE # 1 And RANT #2 aren’t far below, but linking to my own writing is good for that stupid SEO stuff I ranted about yesterday.

The very banks that were the instruments of the “bubble”  are being the BIGGEST OBSTRUCTIONISTS in allowing us to pull out of the “housing slump”.

There I said it.

Yes, there are  a lot of other guilty parties. Most of them crashed and burned already, as in the speculators and those involved in corruption or fraud. Not enough of them are in jail yet. A lot of the “good times” Realtors and Loan Officers from a few years ago are waiting tables, selling cars or dealing cards again.

But this rant is about the banks and lending institutions. The federal government (that be us) has released gazillions, give or a take a few, of dollars into the system so that the banks can LOAN AGAIN!

And the BANKS AREN’T DOING IT. Lending FREELY is what got us into the mess, so I’m not advocating that. What I am advocating is THAT THEY NOT KILL DEALS BY TELLING THE APPRAISERS TO BE ULTRA CONSERVATIVE. Nice houses on nice streets, in nice neighborhoods that are not crappy short sales or foreclosures are exactly that!

They are very often not Crappy,

They are NOT Short sales

The seller is not a bank who’s desperate to get a home off their books.

The Buyer can afford what they agreed to pay on a monthly basis, based on their credit, income, and downpayment.

The buyer and seller agree that the value is equal to both parties. In other words, there’s an ARMS LENGTH TRANSACTION.

Here’s an example of what I mean.

The buyer and seller agreed to a price, based on supply, demand, condition and timing. The buyer perceived it to be the best house for their needs, and at a price they can afford COMPARED TO ALL THE OTHER HOMES FOR SALE THAT THEY COULD HAVE CHOSEN. The seller is being freed up from the property to buy a different property.

The home is particularly nice, is meticulously landscaped, and on a very nice street in a very nice neighborhood.

The Realtor(s) involved (yes, I’m one of them) boldly make the case that an appraisal that’s 30,000 below what BUYER and THE SELLER agree is a fair price for that particular house, is lacking ANY COMMON SENSE, LOGIC, or REASONABLENESS. 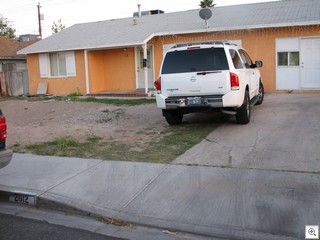 Remember the description of the property that I used above?

HERE’S A PICTURE OF THE PROPERTY NEXT DOOR TO THE COMP THAT WAS USED IN THE LOWBALL APPRAISAL.

Much of the rest of the street looks the same way as this house.

I ask you? Does this look like “particularly nice”, “meticulously landscaped”, “on a very nice street” in a “very nice neighborhood”?

I don’t think so, either. But the appraiser says that the “nice” house is worth the same as the comp he used. Yes, it was the same square footage, mainly because of the crappy GARAGE CONVERSION.

I’m really trying to not disclose the subject property unless the current buyer an seller let me. I know that they both read what I write on a regular basis. If they give me permission, I’ll update this post to show the actual addresses and photos of the comp as well as the subject property. One of the other comps is on a similarly bad street in what I call the “undiscovered” neighborhoods of Vintage Vegas.

Even The BUYER agreed that the comps that were used were unfair, and not “Comparable”. That’s what the abbreviation “Comp” stands for. The buyer asked the lender for an “appraisal review”. The bank and the appraiser ate up 10 days only to come back to us and tell us that they stand by their appraisal, EVEN though a house that was 700 square feet smaller closed for MORE THAN THE APPRAISAL only 3 weeks ago.

The bank says their hands are tied by their rules. They’re allowed to go with the review number, BUT, it has to be by the same appraiser that did it in the first place. Gee, I can just imagine the poor appraiser willingly admitting that he screwed up, or willing putting is livelihood at risk by going against the banks demand for “ultra conservative” appraisals.

The Banks are DEMANDING that the appraisers be ultra conservative. The banks rules won’t allow a second opinion. The bank won’t allow the Realtors to educate the appraisers about local niche pockets of Real Estate such as Vintage Vegas. This is not unique to this one bank. I’m hearing similar stories about all the banks.

2 years ago, the banks were DEMANDING that the appraisers come in at the rocket fueled increasing sales prices. Can you say MASSIVE PROFITS from making massive amounts of new loans? The same way they have OVER corrected on the lending standards, they’ve OVER corrected on their appraisal standards. The bank now refuses to do the loan except at the lowball, ignorant, illogical, and unfairly low value that the appraiser put on it.

There’s money to loan again, but the banks don’t really want to do it. If they would ease up just a little, so that tip employees could get loans again, so that arms length transactions between intelligent, qualified buyers and sellers can get through, then we could work our way out of the “housing slump”. Price HAVE come down to affordable levels, and buyers want to buy now, if the banks would only start to lend again.

Real Estate Right Now Is A Roller Coaster of Drama that’s on the deck of a cruise ship that’s bouncing along through choppy waters. GOOD SEASONED Real Estate Agents like myself are ready and able to help you get safely back in your bed in your OWN HOME.

Saturday, In Part 4, I’m going to RANT about the other thing the banks are doing that are making things worse. Stay tuned.

UPDATE: I wrote this piece on Tuesday. But by the time I was ready to publish it:

There’s a new lender that’s a mortgage BROKER, instead of a bank. There’s a new appraiser. Even without seeing the house, the new appraiser says “no problem” with the original sales price. That was my position from the get go.

We’re back on schedule, everyone’s nerves are calmed, and the market is starting to stabilize.

Mortgage Brokers are an entirely different animal than actual banks. Mortgage Brokers have hundreds of sources of loans, and are willing, able and actually WANT to make loans.

And anyone who’s thinking of using a bank with a stage coach logo ought to think twice, if you really, actually,  intend to get a loan to buy a house, now that they’re affordable again.