We’ve been way too top heavy in the Urban Living department lately, so it’s time to get back the real estate and the retro homes and the historic neighborhoods. 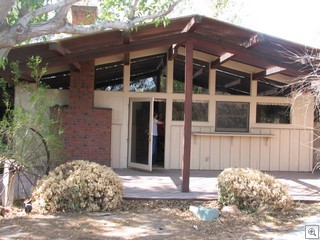 Last Thursday was the inspection on the secret Mid Mod foreclosure deal that I’d been working on. I learned a long time ago about what to expect in the worst case scenario when you go to turn on the utilities.

When you call the the Las Vegas Valley Water District, or the city of Henderson or The City of North Las Vegas, tell them to UNLOCK THE METER ONLY. Tell them NOT TO OPEN THE VALVE. When you get to the property, make sure you have someone INSIDE THE HOUSE that can yell at you or be connected to you on a cell phone while you open the valve. 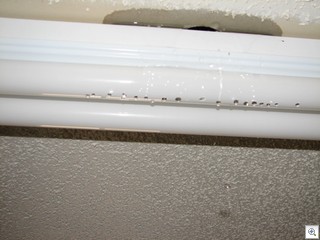 MaryJoy went with me to the Mid Century Modern foreclosure. Even though we were on the cell phones, I could hear her SCREAMING “SHUT IT OFF!”. Fortunately, the broken water pipe in the attic was only over the garage, but as soon as I opened the valve, water started gushing out of the ceiling and light fixtures. No damage to the house itself, and probably no damage to the garage either, but part of the drywall will have to come down to find the broken pipe and fix it.

Bottom Line…. Have someone in the house when you turn on the water. It’s easy to be fooled because the toilets will start to fill and and it’s easy to think that it’s just normal for the meter to start turning for the first minute when the valve gets opened.

I’ve seen new floods get created from the Ice Maker line that’s not shut off, washing machine valves that are open, and in this case, an actual broken pipe in the attic.

Before you call Nevada Power, (or at least the day before they’re coming) go to the house and TURN OFF ALL OF THE CIRCUIT BREAKERS! When NP turns it on, they’ll be able to see that all the breakers are off and that there’s no movement in the meter.

When you get to the house, watch the meter as you turn on each breaker one by one. The reason we do this is because you can test each breaker for starters, but you can also find out that the oven isn’t on. 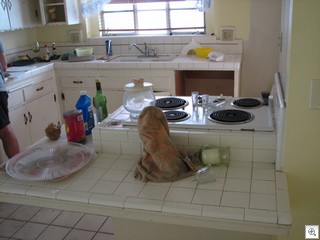 Last week, a different buyer of a foreclosure told NP to turn on the electric for Wednesday, but the listing agent call NP themselves and had it turned on for Tuesday. When we arrived Tuesday afternoon to turn off all the breakers in preparation for NP, we found it already on, and all the burners to the range going full blast. This is the actual kitchen where all the burners were on. Fortunately we arrived only an hour or two after NP.

A year or two ago, I went to check out a house that was listed that morning. When I entered, the house was full of smoke, but I couldn’t see any flames. Turned out the oven was on, and it was doing it’s version of “self cleaning”. I called the agent, who told me they had turned the power on 2 days before that. They were lucky.

As for gas, at least Southwest Gas insists when they start new service that THEY light the pilots and do a test for leaks before they leave the premises. I think Nevada Power and the Water Districts should do the same thing, but they don’t… SO IT’S UP TO YOU!

Think and plan ahead for the worst when utilities get turned on. Hopefully nothing will happen, but better safe than sorry.