I know I already used that line today, but the good news is….The CHEAPEST home in all of Vintage Las Vegas went to contract yesterday.

$39,900. I’ve shown it to lots of people, but mostly mostly they looked just out of curiosity. I’ve always considered it to be a tear down at best. I don’t know who’s buying it, or if they’re going to rebuild it or tear it down, but this one house, being unsold for so long, hasn’t been helping with the comps or the pricing of what the banks are asking for homes.

It’s a Huntridge home, but it’s been added onto so many times, stretched and expanded and modified in so many ways that even I can’t find the original home hiding underneath.

The tax records show the home to be 1088 sf, which would be the typical size for a Huntridge cottage with the carport converted. This home has about 2000 sf under roof, though it doesn’t look like it from the front. 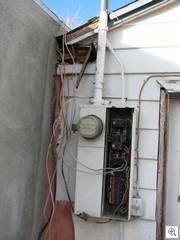 I’m glad that the MLS only allows us to use the square footage that’s recorded at the assessors office. I see listings all the time that say, “garage conversion really makes it 2000 sf” or “bedroom expansion not included”. I know people don’t want to go thru the hassle, pay more for using licensed contractors, and they don’t want to pay the higher property taxes, but they’re also making their homes unsafe, or hurting their resale value. When these horrible broken homes become bank repos, they can hardly be given away at all. Then when they do sell, they create horrible comps that shouldn’t be used by appraisers, but which can’t be ignored.

I’d really like to see the city and county crack down on unpermitted expansions and living spaces. The inspectors will drive by oblivious to ongoing construction and never say a word unless someone has called in to complain.

Cracking down on building permits won’t change the consequenses of lax practices in the past, but it will help us in the future. If we can’t learn from our mistakes, we’re doomed to repeat them.

If you’re seeing things going on over the wall that don’t look “kosher”, you can use the same phone numbers that you use for grafitti and shopping carts and cars on lawns. In the county the number is 455–4191 and in the City of Las Vegas it’s 229–6615.

As long as I’m mentioning the other blights on our neighborhoods, there’s a very good brochure of the basics of what’s acceptable and what’s not at your neighbor’s home (and mine, as well). The brochure is from the City, but generally the rules are the same if you’re in the county.

Not All Pink Bathrooms Are Pink!