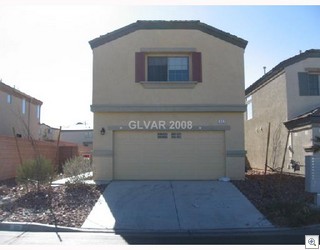 Great architecture and interior design disappeared and has been missing for about 30 years. The conformity that I often hear referred to as â€œcookie cutterâ€ became the standard. The concepts of merging the inside and the outside living areas of a home got lost when the average lot size got cut in half or worse.Â TuscanÂ  heaviness and ornamentation became the norm, and itÂ was so overdone that it becameÂ boring and pretentious.

All of that is one of the reasons thereâ€™s such a renewed interest in modernism. Most of the 1950â€™s and 60â€™sÂ homes that we go on aboutÂ at such length here at VeryVintageVegas fall under the categoryÂ of Mid Century Modernism. Whether they were â€œdesert modernâ€ or â€œranch modernâ€ they were still modernist. The concept of the great room has itâ€™s roots in modernism. The sliding glass door and wall of glass were vital elements of the new way of living that was exemplified in modernism. Bright sunny homes with minimal division between rooms, colorful kitchens and bathrooms, the use of natural materials for full wall fireplaces,Â andÂ cleanÂ lines and lack of ornamentationÂ became the standard during the 20 year reign of modernism.

Las Vegas is unique among cities in America. Itâ€™s a new city. The first really big growth spurt startedÂ 1950 when the city only had a population of 50,000. That spurt lasted till 1970 and coincided exactly with the baby boom years. In every other major city, the baby boom happened in the suburbs. It did in Las Vegas also, but the new suburbs were were only a mile or twoÂ from downtown. I grew up in the suburbs of Columbus Ohio. OurÂ Mid Century Modern baby boom neighborhood wasÂ 20 miles from downtown. Neighborhoods like oursÂ formed a ring around a city that was alreadyÂ a million and a half people inÂ 1950.Â 20 miles from downtown is Â where youâ€™ll find all the 50â€™s and 60â€™s modernism in just about every city in America, except for this one.

The majority of the people who Iâ€™ve been selling homes to in the last many years bought in the urban core because thatâ€™s where the modernist homes are in Las Vegas. Some of those people are purists. They insist on original 50â€™s and 60â€™s kitchens. Their rallying cry is â€œSave The Pink Bathroom!â€. Iâ€™m one of them, though mine is black and grey, but theÂ term pink bathroom is merely a euphemism for all the maroon or blue orÂ yellowÂ or salmonÂ or black and grey bathrooms.

But now itâ€™s the 21st Century, and modernism as it was defined in the mid 20th century is being re-shaped and re-imagined by a whole new set of architects and designers. Itâ€™s being discovered and admired by a whole new generation that grew up in the boring world of tuscan heaviness. 21st century modern has arrived in Las Vegas. Mostly itâ€™s shown up in Â â€œloft designâ€ living spaces. Blue Heron has done a superb job with it. The Urban Lofts in Downtown are an excellent example. With the right interior designer, even Soho and Newport Lofts get it. Personally, Â I think they ought to put in pink bathrooms, but I doubt that thatâ€™s going to happen. Iâ€™ll settle for sleek ones with natural stone surrounds.

The elements of 21st Century Modernism will fit beautifully into Mid Century Modern homes. Kitchens that are being updated can look like the kitchens in the new lofts. Sleek, stylish, unadorned. They donâ€™t sell them at LowesDepot. Youâ€™ve got to go to Ikea or any number of other manufacturers to get them. But they work perfectly. I donâ€™t even have a problem with granite. Itâ€™s natural after all. But, just not that boring grey speckle one thatâ€™s in most of the homes in Summerlin. You know which one I mean. Our listing on Oakey is a perfect example of a 21st Century Kitchen in a Mid Century Modern Classic.

Most of my readers arenâ€™t into condo living. Theyâ€™re certainly not into â€œThe South Stripâ€. However, Loft 5 has reopened and are practically giving away their lofts. Theyâ€™re about 1/2 price of what they first sold for before the mortgage crash caused almost all of their sales to fall apart. The whole complex is now bank owned, and theyâ€™re literally giving them away. Every unit is between 279k and 379k, which is less than they cost to build them. Â

I only mention it because the designs exemplify everything Iâ€™m talking about, (and if you buy one I can represent you, even if theyâ€™re not in a historic neighborhood!). Did I mention theyâ€™re offering to pay the closing costs and 2 years of the HOA? Ok, I managed to turn this post into an advertisementâ€¦. but seriously, theyâ€™re worth considering if youâ€™re purely modernist design oriented, and theyâ€™d make excellent rental properties at those prices as well.

Iâ€™m hoping weâ€™ll see a lot more blending of 21st Century and Mid Century Modernism in the classic homes of Las Vegas. After all, Pink Bathrooms arenâ€™t for everyone, and neither are condo lofts in the suburbs.