Some “Housing Slump” News We’ve Been Waiting For – Maybe?

Hubble Smith reports in the RJ yesterday that â€œHousing analyst predicts Las Vegas may be among the first to emerge from slumpâ€.

Thereâ€™s so many factors playing a hand in this that truly none of us knows whatâ€™s what. I know when I watch talking heads on TV blather on and on that they donâ€™t have a clue either. Iâ€™ve been saying for months that with the revival of interest in Mid Century Modern; The urgent desire to reduce commute time and costs; and the desire to live an urban vs. suburban life style, that I believe that Vintage Vegas homes will even lead the upturn when it starts. When?

Iâ€™m certainly in agreement with Larry Murphy, who Iâ€™ve know since I got into Real Estate, when he was quoted in the article:

Iâ€™m mostly selling foreclosures or at least homes that are listed as if they were bank owned. We do have to absorb that inventory, and to my knowledge there arenâ€™t any â€œnewâ€ homes in Vintage Las Vegas. Weâ€™ve been seeing homes priced at much below the cost to build new, or in the case of most of the homes in Vintage Vegas, at considerably below what it costs to buy and fix up in relationship to theÂ well loved and cared forÂ homes. That I think is the answer to yesterdayâ€™s question. The big problem, is that really broken and abused houses rarelyÂ are eligible for an FHA insured loan. FHA loans are the easiest to get, and are being used by the vast majority of buyers.

However, FHA has a â€œlivabilityâ€ standardÂ that requires things to be working. Windows canâ€™t be broken, flooring intact, no holes in walls and a lot of items. The standard is supposed to be that a buyer could move in and live there for a year without HAVING to spend a dime. Cleaning doesnâ€™t count, of course, as dirty IS acceptable. 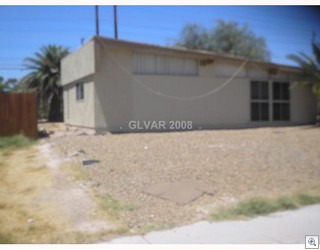 We just cancelled on a deal yesterday where we TRIED to get the bank to go along with making 2 serious repairs so that it the house would be eligible for an FHA Loan. No luck. That house by the way, is a great buy at 99,000, and now that weâ€™ve alerted the bank to the bad roof and the dangerous electric panel, theyâ€™re saying â€œcash onlyâ€ for the next person who wants to buy it.

Youâ€™ll recognize it that I used the picture as a WORST MLS PHOTO OF THE DAY when it first came on the market.

After the inspection, I realized that the thing on the ground in the forefront of the picture is a piece of the roof. It wasnâ€™t there anymore when I was showing the property. Thatâ€™s why we do inspections.

Anyway, I got side-trackedÂ a little, but I didÂ want you to know that there might be some good news out there about a bottom.