The post about the Last Look at the Sahara Rancho Office building started an interesting thread in the comments. Jerry Gropp, the Seattle Architect argued that some Mid Century Modern buildings just arenâ€™t worth saving. We disagreed about this building in particular, but in some cases I have to agree with him.

Some buildings merely have sentimental value. Some have historic significance. Some are just great design and function. Many are a blend of the 3. Â The effort it takes to save a building isnâ€™t always justified. Jerry made the point of a Googie building that was saved in the 80â€™s in Seattle. It became a Dennyâ€™s for the next 23 years and was recently torn down. Jerry argued that it wasnâ€™t worth saving, because of all the changes that had been made over the years to the Seattle building.Â Â He didÂ come around to our way of thinking about the Sahara Rancho building. When the original design, intent and functionality no longer exist, and all thatâ€™s left is sentimentality, then it becomes a tough call as weâ€™ve experienced with the Huntridge.

A case in point also causes me to tell you about one of the other Walter Zick and Harris Sharp buildings. Back in 1954, they built the Southern Nevada Memorial Hospital. Later, SNMH evolved into University Medical Center, or UMC as we affectionately call it today. 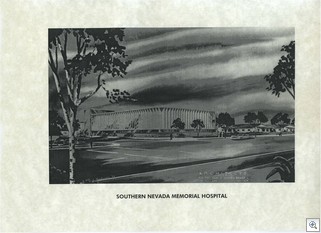 In theÂ applicationÂ to the Clark County School District which askedÂ to get a school named after Walter Zick, we discovered a drawing of the 1954 expansionÂ of the Hospital. The original one story buildings to the east were only just torn down, which is why we know that this is actually the same building as the one below that I took just a few days ago. You can click onÂ any of theÂ picture to get a full sized look. 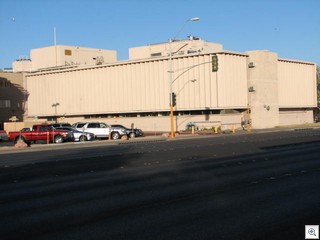 Obviously, the original intent of the architects was not followed over the years. In fact, itâ€™s barely recognizable now. The street became a parking lot, an addition with a round entryway was added to the NW, and most offensively, the additional concrete structure that was added to the front of the building

Iâ€™m told that the rounded entryway to the left of the Zick and Sharp building is going to be removed, which will further change it. 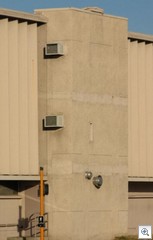 Either there was no other possible way to get air conditioning into what ever rooms are inside the front tower addition, or they just were incredibly lazy and oblivious to what the building would look like when they were finished. I can remember driving by many years ago,Â thinking how ugly the a/c units were.Â Either way, Â I donâ€™t think ANY architect was consulted.

Weâ€™re busy researching some of the bank buildings that were designed by Zick and Sharp. Many of them that weâ€™ve identified have also been changed at the least or totally abominated in the worst cases. Weâ€™ll be bringing them to your attention as we continue this series.

If I heard that UMC wanted to replace this building, I donâ€™t think Iâ€™d be leading the charge to save it. The shame is that we werenâ€™t paying attention 20 or 30 years ago in orderÂ to keep it from having been screwed up so badly.

We do, however have to pay attention to what is still worthy of our efforts. I can only imagine that every Mid Century Modern commercial building in Las Vegas will become endangered in the rapidly approaching future.