I told you last week about the home in Paradise Palms that’s being greened and re-built for the International Builder’s Show in January. 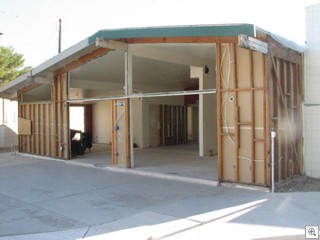 Putting things back together takes much longer than ripping out what you don’t want. They’ve been busy all week and I’m VERY happy to report that the wall of french doors and small paned windows is finally gone for good.

They do a much better job of cleaning up after themselves than I do! 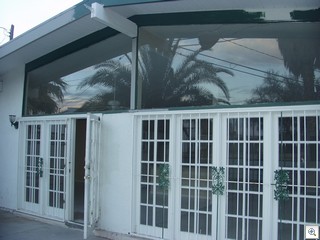 Yes, this is the same wall at the back of the house that I first posted about this home back in January, 2008.

Even worse than that the small paned french door windows (and therefore lots of mullions), was the fact that they had oppressive iron gates behind them as well. The merging of indoor and outdoor living space had been completely undone by previous owners. 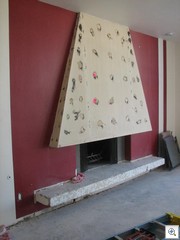 The mirrors and 4 inch tiles have been removed from the floating hearth fireplace. It’s original to the house, but the “80’s mirrors were not. Thankfully, the original design will be kept. 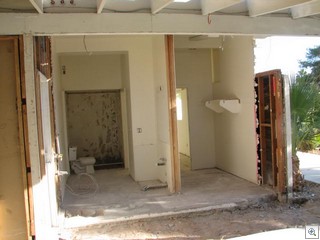 The previous expansion of the master bathroom and walk in closet into the original courtyard is being undone as well. 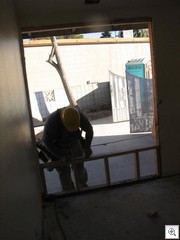 Some of the new framing is being started. The original bedroom windows went clear to the floor. In some cases the windows will be slightly smaller to further reduce heating and cooling loss. Remember, the goal is to acheive a 70% reduction in energy usage.

Electrical and plumbing work began today, and the windows and glass will start to be installed the first week of December. I’ll be talking, then, with the glass guys, and the environmental engineer who did the calculations for acheiving the 70% reduction in average energy consumption.

If you want to see the original 2 posts I did about this house, they’re on page two of the January ‘O8 Archive or they’re about 7 pages back if you did a search in the top left column for “Paradise Palms”. (which is a good place to read every post I ever did that mentions Paradise Palms. There’s some real good stuff there, if you haven’t been reading along with us for the last 3 years).

I was all excited at the time to see a home on the golf course for under $250,000. It looked like a great deal at the time. Who knew?