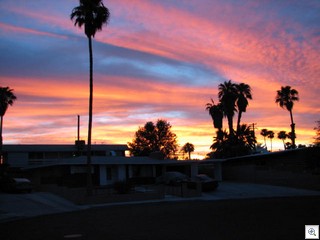 Last night’s sunset from my front yard in the historic downtown Las Vegas neighborhoods that I call Very Vintage Vegas.

There’s 2 redeeming aspects of the annual August/September monsoon season. One of course is that it should/might rain a lot. The other, of course, is the magnificent sunsets.

How it got to be August in the first place is bewildering. Each day is jam-packed with appointments and meetings and paperwork, and phone calls, and they fly by in a flash. I didn’t even realize that the entire months move just as quickly now-a-days.

I SWEAR (once again) to get back to blogging regularly about the mid-century modern homes, the retro neighborhoods and urban living in Las Vegas. One thing that will help is that I’ve hired a new assistant to help me with the paperwork and filing drudgery. It’s so much more fun to be blogging and meeting with people when the paperwork is caught up.

An interesting project that I’m working on with the City of Las Vegas is a smartphone app/Website that will allow any of us with a web enabled phone to report graffiti, junk cars, stagnant/green pools etc to the city without having to call in during business hours. I’m going to City Hall today to do the prototype testing and evaluation.

The selection committee is getting ready to make there final decision as to which of the 4 design concepts will be installed.

Almost all the business we’re doing is short sale transactions. In the distant past (last year), it’s been a slow frustrating, laborious, and insane game. In the last few months, we’ve seen dramatic improvement in every aspect of the game.

And yes, it’s a game. A game well worth playing. If you’re a buyer, it’s still the best way to get a great deal on a home you like. The home will likely to be in much better condition that a foreclosure, you’ll get a quicker answer from a short sale seller than you will from a bank, and the whole process is now averaging 3 months instead of 6 months.

If you’re a homeowner who’s upside down on your mortgage, behind in payments, or struggling financially, there’s no reason to lose your house to foreclosure. A short sale can take the pressure off, give you time to regroup, and will not damage your credit nearly as much as a foreclosure.

In their best of Las Vegas series, they mention (with my help) The Best Historic Neighborhood. I wanted them to mention all of them, but they polled me and their staff and others. I don’t know if there’s really a “best” and I’m partial to them all as you know.

In a valley whose housing stock is ravaged by recession reaching into every gated community, wouldn’t it be nice to find a place with cool houses, cool people and a good neighborhood spirit—in other words, a sense of place? We whittled our list to five and then enlisted the help of two real estate agents respected for their knowledge of Old Vegas neighborhoods: Jack LeVine and Steve Franklin. “It’s tough,” says LeVine, who writes a blog on classic Vegas homes at his website, veryvintagevegas.com, “but I’d vote for the John S. Park/Southridge/Beverly Green combo.” This central Vegas area (east of Las Vegas Boulevard between Charleston Boulevard and St. Louis Avenue) offers “the perfect blend of architecturally cool mid-century homes” occupied by “vibrant, energetic and community-minded souls.” Franklin agrees it’s tough to pick a favorite, but John S. Park is attractive because it “breaks a very basic rule of master-planned communities, and that is conformity.” Like many Old Vegas areas, John S. Park homes are eclectic (“Homes that are 900 square feet can rest comfortably next to a 2,500-square-foot home,” Franklin says) and therefore house a diverse group, from artists to attorneys. Franklin sees the area as a naturally developing community, regaining the luster it once had in the 1950s. “Many downtown business owners opt to live downtown,” he says. “It adds to that community and neighborly sensibility. We truly get to live, work, and play, all within a three-mile radius. Where else does something like that happen in the Valley?”