The REO Show – Where Distressed Is The New Normal

It was the most fun I’ve had in years.

It started with an email that almost got deleted among the hundreds I get to wade thru every day.

We’re the producers of a new pilot, “The REO Show”, which, in this case, means Real Estate Opportunity.

It’s about buying real estate in a market where distressed is the new normal. More than just a TV show, REO is a multi-platform program which also includes an interactive website and phone app. We’re featuring unique properties in unique places and would like to showcase some of your “Very Vintage Vegas” listings and interview you.

Of course, the email arrived the morning I was leaving for Austin Texas for 5 days. Did I mention I went to Austin for the Keller Williams Mega Agent Camp? Plenty to tell about that as well.

I started talking to them while I was at the airport. They decided to postpone the shoot until Sunday and Monday when I had returned. I had to do some real scrambling and a lot of phone calls during the convention breaks and in the evenings to get things lined up for them.

I don’t think I really understood what would be involved to have a camera on me as I showed the properties, discussed them, described the features etc. The only thing missing was the slate thing that they use in Hollywood. You know, the “scene 3 – Take 47” board that they snap. All the other players were there. The sound man, the lighting guy, the makeup lady, the director, the assistant director, go-fers, etc. 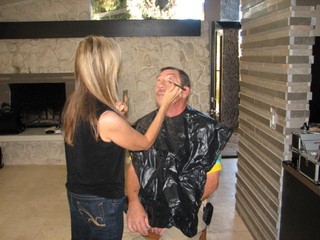 The make up was an especially interesting experience since I’d walked into a tree branch on the Sunday walk thru of the various properties. I had a big cut down my left cheek (of my face). She managed to make it go away totally! It didn’t do much for the wrinkles however. She told me I’d earned them all and shouldn’t hide them. Oh well. 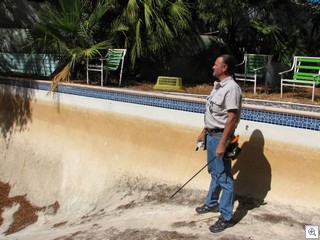 Glenn Curtis, One of the only 6 master inspectors in Nevada (who is ALWAYS my number one recommended home inspector) was also one of the “talent” –which is how they kept referring to us. I found being “talent” most amusing. They kept yelling things like “We need the talent at the front door”.

We had included some fixer uppers in the mix of homes that were filmed.

Here Glenn’s describing that the body and plaster of the empty pool is still in pretty good shape, and that mostly an acid wash would be all that’s needed. 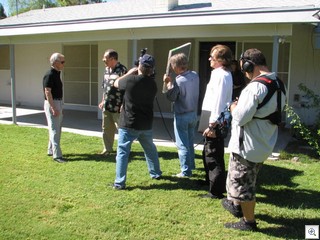 I handed my camera to Glenn at the next house in Paradise Palms. It’s on the golf course, and very very original. It’s Krisel designed plan 8B with the carport converted to garage. It’s listed for 175,000 and still available today. You might recognize one of the pictures from the last time I did a “worst MLS photo of the day”.

What I didn’t know until today is that he’d figured out how to take a video with my camera.  I was surprised to find this video when I down-loaded the pictures. 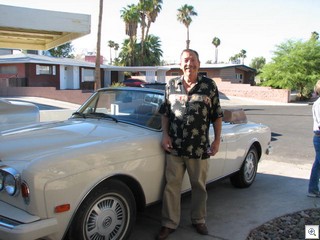 They told me they had rented a convertible for the last part of the day. I was to drive thru the neighborhoods of Downtown Las Vegas and Paradise Palms pointing out the best and worst of the Mid Century Modern Homes.

They didn’t tell me it was a BENTLEY convertible. I certainly hope no one thinks it’s MY car.

The episode will appear on one of the cable Networks in February or March, and I’ll make sure you know about it.