Oakey Avenue is one of those misaligned streets that drive me so crazy. On the west side, it continues eastward over the railroad tracks, but becomes Western Avenue for a short distance till you get to Las Vegas Blvd. But a block south of Western, Oakey starts up again at Main Street and continues to the east all the way to Boulder Highway.

Along the way on the east side of the strip, it provides the North and South boundary for many of our Historic Neighborhoods.

Luv-it Frozen Custard is just east of the strip, and has been an evening tradition for  35 years for downtown residents. It’s popularity is demonstrated by the line of patrons every evening, year around.

Of course taking a right or a left turn and a little zigzagging will practically stop your heart over the classic homes of the 40’s 50’s and 60’s. You’ll find homes in pockets of custom homes and tract homes. Of course, in Very Vintage Vegas there are no two alike, even among the tract houses. NOTHING looks just like the one next door as they do out in the suburbs. 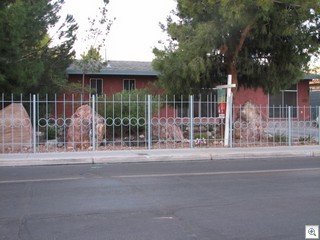 But Oakey itself is our topic today. Of course I can’t talk about the subject without reminding you of one of the most unique and fabulous homes you’ll pass along the way. 807 Oakey, is our listing which, in order to save the amazing tongue and groove, beamed ceilings, was lifted entirely up in the air and had an entirely new foundation and slab poured for it. It’s truly a special home, as are many of the properties along Oakey. 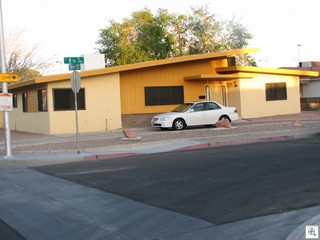 There’s an interesting pocket of Mid Century Modern homes on 8th Place, which is one of the few cul-de-sacs in the downtown neighborhoods.

This one at the end of 8th Place was the subject of a “Christmas In April” Project last year, which we blogged about on the old blog as it was happening.

The Huntridge Neighborhood Starts at 10th Street, and I’m happy to report the city code enforcement has started to crack down on the parts of Huntridge that face onto Oakey. From 10th to 14th, on both sides of Oakey are way too many properties that just aren’t being taken care of. We have zoning codes that are supposed to help keep neighborhoods nice, and to help enhance the quality of life.

Too many people are judging the entire area by these 5 blocks along Oakey. They’ve always been a problem, and last summer, I was pleased to the them starting to turn around as the rest of the area already had. But it seems to have been a pretty rough winter for the owners of the dozen eyesores in that 5 block stretch. But they are still the exception, as there’s some beautifully maintained and well kept homes.

As I reported last week, the beautification project that the City of Las Vegas and Gorman High School Students performed took care of one of the eyesores, which was the pocket park on the NE corner of Maryland and Oakey. It’s now weed free, and freshly rocked.

Starting at 14th Street, you’ll start passing thru a variety of some of the best custom home neighborhoods.  Historic Marycrest will be on your right, followed by Crestview, and Morning View, and on the north side of Oakey, you’ll find Becke Circle, and Concordia Circle.

Continuing to the East on Oakey you’ll find 2 of the earliest suburban religious buildings. Originally, the only Jewish Temple is now the “Innovations International” a private k-12 charter school. The United Methodist Church, which is also at the corner of 17th Street still maintains it’s great mid century architecture. 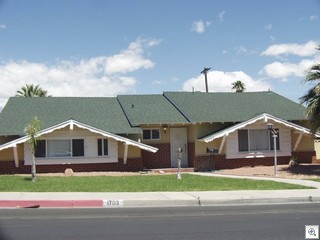 And to finish our tour, From 17the Street to Eastern, is the bottom edge of the “Bel Air” neighborhood, and the largest single concentration of Cinderella Ranches in Las Vegas. These homes are often called “story book homes” or gingerbread houses. We prefer the name “Cinderella Ranch” which we learned from noted architectural historian Alan Hess  at one of his occasional lectures on mid century modernism.