If you haven’t stopped in to catch up on your VeryVintageVegas reading for a few days, then you might want to read yesterday’s posts before you read this one. Scroll down, or click here for the worst MLS photo, and click here for the announcement. (The headline above is one of those SEO things I’ve talked about in the past).

That was an interesting experiment. 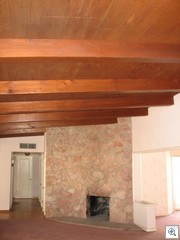 It was the first time in my 18 years as a Realtor that I held an open house in a vacant bank owned repo. And it was a “palm springs style” mid century modern one at that. I’m considering it to have been  big success, and it was interesting and thought provoking as well. And, as always, I learned a few things.

9 people/groups came thru. 3 read about it here on the blog. 3 saw the signs for 1720 15th Street (which also had a good turnout). 3 saw signs pointing to 704 Canosa, where I was conducting the tour and answering the questions. There was an additional person, who was an agent scouting for her weekend client. 1 of the groups was Pam and Susan. They like almost EVERYTHING that I like, and for the same reasons.

Everyone who saw it, now knows what I mean when I say I’m all gung ho on it.

There’s 2 of the groups that were kinda/sorta/very/maybe interested. I’m still showing it by appointment, if you were at work, or didn’t know about it. That is until it’s sold. It’s the kind of house that sells has been selling quickly (within 2 weeks or so). It’s been on the market  for 5 days. I believe I was the first person to find it in the MLS, and it was the impetus for the “Fun Fixtures Found In Foreclosures” that I started on the 11th.

I learned that I not only have to bring lots of water to a vacant open house, not only for myself, but for the visitors. I’ve done hundreds of open houses over the years. I’ve never been a “bring cookies and soda and ice tea” kinda guy when I do them.

I got to meet Vince who’s our singularly most prolific “commenter”. We’ve had lots of email exchanges regarding the comments he leaves, but that was the first time we met in person. By the way, ALL of you are welcome and encouraged to comment  on any of my posts, or to come out and meet me in person.

I had a few gaps where I was able to study the architecture, and decipher the changes that have been made to the house over the years. It was once a well loved palm springs style mid century modern home. It was designed and later modified by creative people. It was subsequently abused and neglected by some other people. I want it to get a new lease on life. It deserves it.

I’m convinced it was designed and/or built by the the same guy who built my house. There’s 4 telltale or obvious signs in the design and materials that were used that makes me think so. I’m going to ask some of my “research assistants” to help me prove it. (You know who you are, and I appreciate you, more than you know.)

I just might do this once a weekly with whatever will be my favorite and or best-deal foreclosure of the week. That is,  as long as I bring water.