Meg moped and whined, but consistently kept looking for a great mid century modern home. The whining was because her dream house had gotten away from her. Actually she started looking about a week too late. Karl and Lorraine were already in contract for the mid mod on 14th Street when Meg found it on line, visited VeryVintageVegas for the first time and called me to see it. I showed it to her anyway, even though it was already under contract.

Heartbroken is a mild word to use to describe what she felt. Would there ever be another that would make her forget it? We scoured Downtown, and Paradise Palms and McNeil and even ventured to Henderson once.

One of the fallouts of the whole foreclosure, lending crisis that we’ve suffered the last year is that most of the most interesting homes aren’t on the market. The sellers are just waiting it out. But occassionally……something very special pops up. I’ve always got my nose to the ground looking for them. 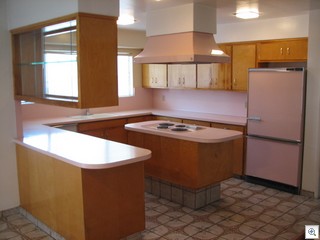 July 4th weekend, I posted a story called “You Never Know What Will Pop Up”. Dean Martin’s cousin’s house on 6th street had been put into the MLS at 3 in the morning. I was there at 9:15, camera in hand. Meg was the first client I called, and she saw it on July 4th and 5th and 6th and was in contract to buy it on the 7th.

Meg’s getting her keys today. That she hasn’t had a heart attack from over excitement during the last month of escrow is a miracle in itself. If she’s going to have one, it will be around 5pm when I let her in. 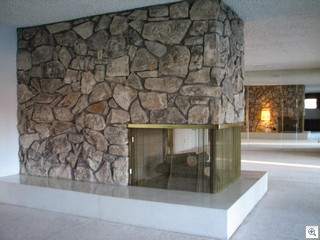 There’s hidden treasure, architecturally and design wise behind many a front door in Vintage Vegas. I’ve been trying to show some of them to you in the “Fun Features Found In Foreclosures” series that we’ve been running. I try to see 5 or more listings a day in order to “know the inventory”.

Even when great homes pop up that aren’t my listings, I’m trying to use them to educate , and to present them to you. For example there’s a real sweetheart mid century modern home that I mentioned last week, that no one has grabbed yet.

Anyway, Congratulations Meg, and as my russian grandfather said to me the day I bought my first home….“WEAR IT IN GOOD HEALTH!”