The History Of Las Vegas Is A Favorite Topic At VeryVintageVegas

A major component of the regentrification and revitalization of the urban core of Las Vegas is the history that created it in the first place. We work very closely with a variety of groups, non-profits and organizations that are all about keeping the history alive and intact.

Friends of Classic Las Vegas is the first example. Lynn Zook is the founder and chief historian. Lynn blogs regularly on the subject and is as diligent and inspiring as anyone in town about tracking down the real stories, documenting it, and presenting it to the public in blog format, as well as with a series of monthly panel discussions. The FOCLV blog is one that I think you should all be reading as frequently as possible. You’ll be amazed at what we learn there.

The Second Sunday of each month is also their business meeting. That’s TOMORROW! Sunday October 12. at 2 pm. Rex Bell Jr. will be the featured speaker.

Just wanted to let everyone know that Rex Bell will be joining us at our FCLV meeting next month.  Rex’s parents were the film stars, Rex Bell and Clara Bow, and they had a wonderful ranch out in the Searchlight, the Walking Box.

Rex has some wonderful stories about those years and about growing up in Las Vegas so please join us on:

There’s An Update on the soon to be Las Vegas MOB Museum and you can spend a whole day reading back thru the entire blog. You’ll find biographies of many of the early families, photos and commentary on the rat pack era, and lots of stuff on the early years of the strip. Read FOCLV regularly, and you’ll have more trivia for the next cocktail party than you’ll ever be able to remember.

Probably closest to my heart is the organization that promotes and teaches about the the artistry, simplicity and beauty of Mid Century Modern Architecture. The Atomic Age Alliance meets monthly, and always has something interesting up it’s sleeve. AAA has recently decided to focus itself on residential modernism, which is why we had the first tour of Paradise Palms last week. Over 200 people came out to see the homes that were held open.

AAA is diligently attempting to educate the homeowners and potential owners on the beauty and artistry of Mid Century Modern Architecture. All of the historic neighborhoods of Las Vegas are plumb full of MCM home, and far far too many of the previous and current owners have done horrific things to these homes. The fast growing cadre of homebuyers who love MCM will gladly pay more for homes that have not been “re-muddled”.

Dr. Lonnie Hammargran and The Hammargren Home Of Nevada History 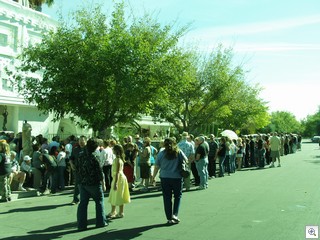 Dr. Lonnie Hammargren is the GodFather of Historic preservation here in Las Vegas. He’s the ultimate packrat. He’s turned his home into one of the largest museums in the state. Most of the year, it’s his personal private little playground. But on Nevada Day Weekend, he holds it open to the public.

This is the official first announcement here on VeryVintageVegas about this year’s open house. Sunday NOVEMBER SECOND. I’m helping to coordinate the volunteers, and any of you are welcome to sign up. That way, you avoid the massive line, get to do a small part in helping the cause, and probably get a chance to learn a little more than the typical visitor. You also get extra brownie points with me.

If you want a little preview, there’s a virtual tour here, but every time I’ve ever been there, there were so many changes, new artifacts, and so much to see in general that you just have to keep coming back.

At VeryVintageVegas we also support and promote the Neon Museum, The Nevada State, which will soon move to the Springs Preserve, The Clark County Museum, and soon, we’ll be supporting the Mob Museum.

All of these groups and many more will be represented next Friday at an all day workshop on Historic Preservation in Las Vegas. The afternoon session, is open to the public for a major roundtable brainstorming. If you’d like to attend the RSVP information is in this link. If you can’t attend, and have something you’d like to have put on the table, you can contact me privately or by commenting on this post,  and I’ll take your suggestion or idea to the roundtable for you.

So many of the people who’ve moved to Las Vegas in the last 10 or 15 years (which is well over half the population) have no idea about the rich and colorful history that led up to the Las Vegas they live in now. Obviously, I can’t be out promoting the 40’s, 50’s and 60’s neighborhoods as Historic if I don’t put it all into context. That’s why Las Vegas History is one of the core topics that you’ll always find at VeryVintageVegas.